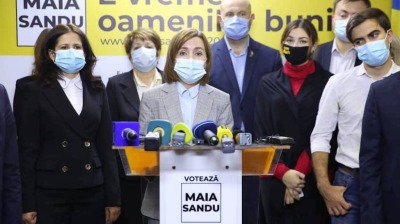 Maia Sandu, founder and president of the Party of Action and Solidarity (PAS), will become Moldova’s sixth president, after she defeated the pro-Russian candidate and incumbent President Igor Dodon by a wide 15pp margin.

Sandu, a staunch advocate of integration with the EU, received 57% of the votes, after the results in 99.5% of the voting sections were counted.

She achieved victory in the second round despite vocal support for the incumbent from high-ranking Russian politicians — although this was not matched by financial support from Moscow.

The high turnout among Moldova’s large diaspora helped Sandu to victory. Photos and video footage from cities in Western Europe and the US show huge queues outside Moldovan embassies as diaspora Moldovans sought to cast their votes.

Addressing a crowd of supporters outside the PAS headquarters, Sandu thanked everyone who came out to vote, saying: “Today we witnessed an extraordinary mobilisation of Moldovans.

“Despite the crisis, despite the distrust of institutions, despite a dirty campaign, people have gone to vote in very large numbers — here in the country and in the diaspora. People went out to vote because they care. People want their voice to be heard, people want respect, people want power to give them solutions to their problems,” she said.

Speaking of what is to come post-election she said the first task would be to come together as a united society.

“We all want to live well, here at home, to have a state that protects us, to work for people, not for thieves. We need a developed economy that offers opportunities here at home so that our people are not forced to move away from their loved ones. We have this common agenda and we all need to work like this to achieve these goals.”

Sandu was minister of education between 2012 and 2015 and served briefly as prime minister in June-November 2019 during a short-lived alliance between the PAS and Dodon’s Socialists forged to oust politician and businessman Vlad Plahotnuic.

Having twice been outmanoeuvred by Dodon — she was the runner up in the 2016 presidential election and forced out of the prime minister position a year ago when Dodon struck a coalition deal with the Democratic Party formerly led by Plahotnuic — she has now succeeded in ousting him from the presidency.

She takes on a country ravaged by coronavirus (COVID-19): in per capita terms Moldova has had one of the worst outbreaks in Europe with more than 80,000 cases reported since the start of the pandemic in the country of just over 4mn people.

Lacking the access to international markets enjoyed by Central European countries, the government has been forced to cut back in response to the extra costs and loss of revenues resulting from the pandemic. Financial stability was achieved at the price of keeping the aid provided to companies and social expenditures at very low levels during the crisis.

The country is still waiting on funding from the International Monetary Fund (IMF), European Union and Russia. The election of Harvard-educated Sandu, who worked for the World Bank before entering the political fray in Moldova, is likely to speed up the process of securing funds from the IMF and EU.

Romania is another important supporter of its smaller neighbour, and Romanian President Klaus Iohannis was quick to congratulate Sandu on her victory.

“Congratulations to @sandumaiamd for winning the presidential elections in #RepublicaMoldova! The citizens of Moldova have chosen to continue the European and democratic path, a path of progress! [Romania] will remain with Moldova in the real efforts of modernisation, democratisation and rapprochement with the EU,” Iohannis wrote.

In the run-up to the election, Dodon had enjoyed some verbal support from top Russian politicians, including President Vladimir Putin who said in October that he hoped the Moldovan people would appreciate Dodon’s efforts to build relations with Russia, as reported by Tass.

He also questioned whether Moldovan products would receive a welcome on EU markets: “[W]ho buys the Moldovan wine?" Does anyone in France buy Moldovan wine? Who needs it in Europe, where there is excess supply,” the Russian president said, adding that other branches of the Moldovan economy are so “dependent on Russia that they simply cannot exist [without Russia]”.

Other Russian politicians warned of the possibility of unrest on the scale of that seen during Ukraine’s EuroMaidan or the current protests in Belarus, and claimed the US was preparing to interfere in the vote.

“The Americans are preparing a ‘revolutionary’ scenario for Moldova, which in November this year will elect a president. They are not satisfied with the current head of state, Igor Dodon, who maintains constructive relations with the CIS countries, including Russia,” said the head of the Russian Foreign Intelligence Service, Sergey Naryshkin, ahead of the vote.

However, Moldova has not yet received any of a €500mn loan from Russia previously announced by Dodon, and initially blocked by Moldova’s Constitutional Court. In the event, Moscow sent an insultingly small MDL50mn (€2.9mn) grant to support Moldovan farmers between the first and second rounds of the elections.

Speaking after the vote, Dodon thanked voters and commented on the high turnout. “I urge everyone to stay calm, regardless of the election results,” he said in a statement posted on his Facebook page.

Sandu has criticised the conduct of the election saying that “unfortunately, state institutions did not live up to the challenges posed by this election”. “The Central Election Commission has turned a blind eye to serious and obvious violations of the Election Code. There were several situations abroad where it was clear that there are many willing to go to vote, but insufficient voting sections were opened, so depriving citizens from the exercise of the right to vote. Also, police and prosecution, in some cases, turned a blind eye to organised transportation of voters, even if it is forbidden by law, and did not want to stop voter bribes,” she said.

Change of government ahead

Before the November 15 vote both Sandu and Dodon had talked of the possibility of a snap general election.

Following Sandu’s victory, the minority cabinet of Dodon’s Socialist Party (PSRM) may be overthrown by an ad-hoc coalition as a step towards snap elections to be organised next spring most likely.

While Sandu’s support among voters cannot be challenged after her convincing victory in the second round, the situation in the current parliament partly dilutes her power.

PAS’ natural ally is fellow pro-EU opposition party the PPDA. Ahead of the runoff vote, Sandu also received vocal support from Renato Usatii, a controversial politician with a significant electoral base that is likely to play an important role in the coming developments. Usatii visited the PAS headquarters to greet Sandu immediately after the voting stations closed on November 15. Sandu might also receive support in parliament from the PDM, which has just pulled out from its coalition with the Socialists. But an electoral campaign ignited by a coalition of such contrasting parties will inherently be particularly complicated and the outcome is hard to predict.

Separately, the Socialists may find enough support among lawmakers to remain in office long enough to generate a political crisis. Although Dodon previously spoke out in favour of early elections, he would no doubt prefer to hold the ballot only after a period of crisis and uncertainty that would galvanise his more conservative electorate.

The government in office, even if operating with reduced capacity after a confidence vote in parliament, would remain in the meantime under the control of Dodon — unless he loses power in his party as well.

In some of his messages sent on the Telegram instant messaging platform, Dodon implied imminent and significant developments in parliament. Most likely this means that he is seeking majority support. According to rumours, the outgoing president is trying to replace Prime Minister Ion Chicu at the head of the government and gain marginal support in parliament with the support of MPs loyal to his former rival Plahotniuc and his partner Ilan Shor.