Priests' arrests cause clashes in Montenegro 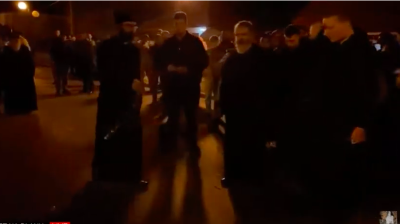 Crowds gathered in Niksic in defiance of social distancing rules.
By Denitsa Koseva in Sofia May 13, 2020

The arrest of eight Serbian Orthodox Church priests in Montenegro provoked protests in several towns, which turned violent in Niksic on May 13.

The priests were arrested after thousands of Montenegrins attended a religious procession in violation of a ban on gatherings because of the coronavirus (COVID-19).

In a response, peaceful protest marches were staged in several towns. A protest was planned in the capital Podgorica by the Democratic Front, the main opposition party, but its members gave up the rally after a conversation with the head of the Serbian Orthodox Church in Montenegro, Amfilohije.

In Niksic, several hundred people gathered in in front of the security centre to urge the authorities to release the priests. However, at some point they also started calling the police “fascists” and throwing stones at them and the police responded with tear gas, daily Vijesti reported. Several people were arrested.

Meanwhile, Serbia also objected to the arrest of the priests but refrained from demanding their release.

According to the Montenegrin authorities, the priests did not inform the police about the planned gathering, which allegedly has threatened people’s health.

However, the situation once again increased the tensions between the government and the Serbian Orthodox Church.

At the end of December the parliament in Podgorica adopted the church law that, according to its critics, may strip the Serbian Orthodox Church of hundreds of religious sites in Montenegro, including medieval monasteries and churches.

This provoked a series of protests in Montenegro and in Serbia and worsened the relations between the two governments at the time.

In mid-February, Montenegro’s Prime Minister Dusko Markovic met the Serbian Orthodox Church’s top bishop in the country, Metropolitan Amfilohije, to discuss disagreements. After Amfilohije has submitted a list of proposed amendments to the law to Markovic, they agreed to a comprehensive review of the law.