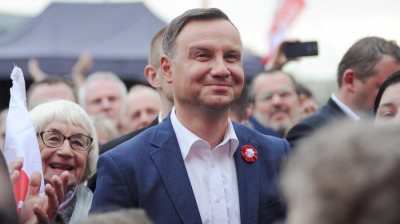 Poland’s incumbent President Andrzej Duda faces a very close race against most opposition candidates in the likely run-off vote in the presidential election this May, a poll published by local media showed on February 17.

The presidential contest could upend Poland’s politics overnight if Duda fails to win re-election. The ruling Law and Justice (PiS) party does not have a majority in the parliament to overturn a presidential veto, which an opposition president is expected to wield habitually.

A poll by publishing house Polska Press Grupa and pollster Dobra Opinia showed Duda winning easily in the first round on May 10. But the incumbent head of state will not manage to get over 50% of the votes, a scenario that would make a run-off vote unnecessary.

The race is going to look very different in the run-off vote, scheduled for May 24. Duda wins by less than 1% in three out of five possible run-off contests, which means even a tiny shift in electorates’ preferences could cost him the presidency.

The poll showed Duda would win by 50.3% to 49.7% against liberal candidate Małgorzata Kidawa-Blonska.

The margin is only minimally wider against Catholic journalist and TV presenter Szymon Holownia, at 50.4% to 49.6%. It is wider but below 1% — 50.8% to 49.2% — were Duda to face the leader of Polish People’s Party Wladyslaw Kosiniak-Kamysz.

Only running against the Left’s Robert Biedron appears safe for Duda with the poll predicting a 53% to 47% victory for the incumbent. Duda would sweep the run-off vote if he ran against the far-right Konfederacja’s Krzysztof Bosak, winning 74.5% to 25.5%.

Most polls suggest Kidawa-Blonska will make it to the run-off with around 25% of the votes against Duda on 40% or so. Holownia, Kosiniak-Kamysz, and Biedron are all at around 8%-11%, polls show. Bosak is bottom in the race at 5%.

Duda officially kicked off his campaign last week with a mass event in Warsaw, with top PiS figures – chairman Jaroslaw Kaczynski and Prime Minister Mateusz Morawiecki – presenting him as a guarantor of continuation.

The president himself delivered a short speech that lacked vision and particulars for the next five years, critics observed.

Moreover, Duda’s standings could worsen in collateral damage from the backlash PiS is facing over the behaviour of its MP Joanna Lichocka. During a parliamentary debate that saw PiS vote for giving party-controlled broadcaster TVP PLN2bn (€469.2mn) in 2020, Lichocka was caught making the middle finger gesture towards the opposition.

The opposition was quick to realize Lichocka’s antics were an opportunity to put PiS under pressure on an issue close to millions of voters. By voting for the money for TVP, PiS overturned a veto by the opposition-controlled Senate, which said it would be better to earmark the money for oncological patients instead.

As a result, the opposition coined the narrative of PiS “flipping the middle finger” to cancer patients across Poland and has since run with it in all media, the internet – and a big video screen in central Warsaw.

Lichocka issued a belated non-apology saying she was sorry if she had offended anyone. “Everybody’s mad at her,” an anonymous PiS MP told Gazeta Wyborcza when asked about the incident’s aftermath.

Digital lockdown
ING: How a post-Covid world could look
Polish ruling party eventually pushes through mail-only presidential election in May