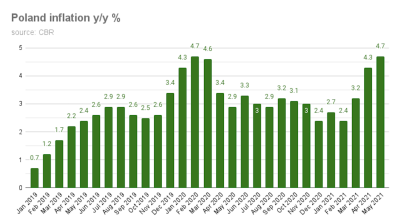 Polish CPI grew 4.7% y/y in May, the annual growth rate picking up 0.4pp versus the revised annual reading the preceding month, the statistical office GUS said on June 15.

The reading is slightly below the flash estimate of 4.8% y/y, which GUS published earlier this month. Despite the growth rate easing from 1.1pp recorded in April, the May expansion in the CPI continues with the ongoing high inflationary pressure in Poland.

“The factors responsible for the acceleration relative to April have not changed. These are fuel, due to the low base from last year, and food. We estimate core inflation at 4% y/y, 0.1pp higher than in April,” ING wrote in a comment.

As the reopening of the economy is gathering pace, analysts also expect that upward price pressure will materialise from pent-up demand.

In May, the increase of the headline index was once again driven by a jump of 19.5% in the transport segment, a gain of 3.3pp versus the y/y growth rate recorded in April. That owed to ballooning fuels prices, which jumped 33% y/y in May.

Growth in the food and non-alcoholic segment picked up to 1.7% y/y in May, compared to an expansion of 1.2% y/y in April. Prices in the communications segment eased growth to 6.6% y/y in May after adding 7.6% in y/y terms the preceding month.

Housing prices, including prices of energy, eased their growth further to 3% y/y in May after growing 5.7% y/y in April.

Overall, goods prices went up 4.1% y/y in the fifth month after growing 3.6% y/y in April. Service price growth was slightly lower at 6.8%, the same as in the preceding month.

Despite the Monetary Policy Council’s opinion that the elevated inflation is only temporary, it “will not fall back any time soon”, according to ING.

“The disruption in supply chains may last until next year when the demand-supply imbalance will be further amplified by an expected rebound in household consumption and Keynesian impulses in Poland, from the EU's Recovery Fund and the Polish Deal. This should sustain and may even accelerate core inflation in Poland in late 2022,” the Dutch bank added.

The May inflation reading changes little in expectations of Poland’s monetary policy, even if recent noises from the MPC have been slightly more hawkish than the preceding month.

“The main concern of Poland’s monetary policy today is the durability of the post-pandemic recovery. It is much too early to consider adjusting monetary policy to the so-called norm,” Adam Glapinski, the governor of the central bank and the head of the MPC, said last week.

“Inflation reached a local maximum in May … But the reopening of the economy and the likely further rise in food prices will bring it back to the current levels at the end of the year,” the state-controlled bank PKO BP said.

“The MPC is aware of increased inflation, but in the council's opinion, it is only the result of factors beyond the control of the domestic monetary policy,” PKO BP added.

In monthly terms, CPI expanded 0.3% in May, easing the growth rate versus an expansion of 0.8% m/m in April.

Turkey’s manufacturing PMI hits six month high in July as virus brake removed
9 hours ago
Russia's GDP catches up with pre-COVID level
3 days ago
Heatwave pushes up spot electricity prices in Southeast Europe
3 days ago
Annual growth of Slovenia’s retail sales slowed to 12.8% y/y in June
5 days ago
73.8% of Montenegrins want their country to join the EU
5 days ago