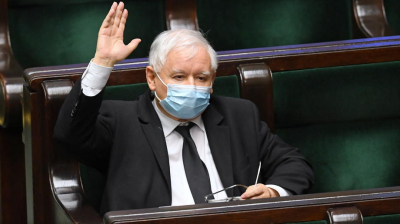 Making the courts dependent on the ruling party enables Jaroslaw Kaczynski's PiS to ignore unfavourable rulings from domestic judges or the CJEU.
By bne IntelliNews October 11, 2021

Hundreds of thousands of people took to the streets in Warsaw and across Poland on October 10 in rallies against the government, which they said wants to push Poland out of the EU.

The rallies were the result of a ruling by the government-controlled Constitutional Tribunal on October 7 that said some articles of the Treaty of the European Union – the bloc’s fundamental law – contravene the Polish Constitution.

The ruling once again led the raising of the spectre of ‘Polexit’, or Poland leaving the European Union, which it joined in 2004.

"I call on all those who want to defend European Poland to the Castle Square in Warsaw, on Sunday, 6pm. Only together can we stop them,” Donald Tusk, former President of the European Council and onetime Polish PM, tweeted on the day of the Tribunal’s ruling.

Poles listened and flocked to Warsaw’s historic centre in thousands. Huge crowds also turned out in over 100 locations countrywide.

“The pseudo-tribunal by order of the president of the ruling party and in violation of the constitution decided to lead our homeland out of the European Union,” Tusk told the crowd in Warsaw.

Tusk thus referred to the government-engineered line-up of the tribunal, widely considered as servile to the political will of Poland’s ruling party, Law and Justice (PiS), and the party’s chairman, Jaroslaw Kaczynski.

A group of pro-government nationalists staged a concurrent rally, trying to drown out speeches by Tusk and other opposition figures, including the 94-year old Wanda Traczyk-Stawska, a veteran of the Warsaw Uprising against the Nazis in 1944.

“Be quiet, you dimwit. This is our Europe and no one will lead us out of it,” Traczyk-Stawska told the nationalists’ leader Robert Bakiewicz.

The background to the tribunal’s ruling is the long-standing spat between the PiS government and the EU over the former’s overhaul of the judiciary. Brussels says that the reforms are violating the EU’s principles of rule of law, because they damage judicial independence.

Making the courts dependent on the ruling party enables PiS to ignore unfavourable rulings from domestic judges or the CJEU. It also destroys the confidence of foreign investors that European law will be implemented in a uniform way across the EU.

Particular elements of the changes have been challenged by several rulings of the Court of Justice of the EU (CJEU), which Poland ignored. The Commission has even asked the CJEU to impose a daily penalty on Poland for ignoring its ruling on suspending the disciplinary chamber of the Supreme Court.

The PiS government insists it has no intention of leaving the bloc but is only concerned by the trend of the EU "usurping" more and more competencies that should belong exclusively to the member states.

The EU, predictably, takes an opposite view, a harbinger of tension only to grow between the two sides.

The tribunal’s ruling is also going to complicate Poland’s standing in terms of receiving tens of billions from the EU’s pandemic recovery fund, which Brussels had decided recently will be conditional on member states’ meeting the rule of law criteria.

Poland's fund money is already being held up because of what the EU sees as its violation of the key principles of rule of law.

“I cannot imagine that Poland would receive money from the [recovery fund] in this situation,” the European Parliament’s Vice President Katarina Barley told the opposition newspaper Gazeta Wyborcza on October 10.