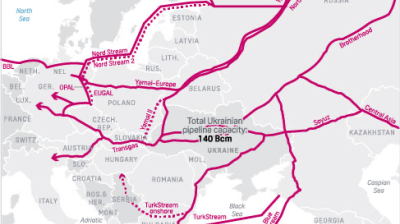 The Yamal Pipeline from Russia to Europe has provided the Poland with the majority of its gas imports; it will soon do so no longer. / bne
By Jennifer DeLay May 24, 2022

Poland’s Climate and Environment Minister Anna Moskwa announced on May 23 that her country was terminating its inter-governmental agreement (IGA) with Russia on natural gas deliveries via the Yamal-Europe pipeline.

Moskwa made the decision public in a post on Twitter, saying: “Poland has repudiated the international gas agreement from 1993 on Yamal.” She indicated that Warsaw was stepping away from the deal, which is not officially due to expire until the end of 2022, immediately.

She also stated in the same Twitter post that Poland had taken this step in response to Russia’s invasion of Ukraine. “Russia’s aggression against Ukraine has confirmed the accuracy of the Polish government’s determination to become completely independent from Russian gas. We always knew that Gazprom was not a reliable partner,” she wrote.

The minister elaborated on these points later on May 23, telling PAP newswire that Warsaw viewed termination of the Yamal contract as a logical response to the fact that Gazprom, Russia’s state-owned gas giant, had halted shipments to Poland in April. She also stressed, though, that Poland’s decision would not affect shipments through the Yamal-Europe pipeline to Germany, saying that the Polish company Gaz-System that operates the Polish section of the link would continue to keep the gas flowing.

This will allow for Poland to continue using the Yamal-Europe system for reverse-flow shipments from Germany, she added. “Inter-governmental agreements with Russia that are breaching European law should not be in place any longer,” she told PAP. “The Yamal pipeline is functioning in line with the European law, which allows it to be used for reverse supplies of gas from Germany to Poland without interruption.”

Moskwa’s announcement on Twitter is not exactly a surprise. The Polish government has already made it clear that it will not comply with Russia’s demand that Gazprom’s customers pay for gas in rubles, and the country’s national oil and gas concern PGNiG told its Russian supplier in 2019 that it did not intend to extend the Yamal-Europe contract beyond 2022.

Meanwhile, Poland’s Secretary of State for Energy Security Piotr Naimski noted during a public radio broadcast on May 23 that the government had adopted a resolution on the termination of that contract on May 13. Warsaw intends to send Moscow an official notification of its decision today, he said.

Poland has been importing about 10bn cubic metres per year of Russian gas via the Yamal-Europe pipeline. This is enough to cover half of the country’s demand, which currently stands at around 20 bcm per year.

Russia denies defaulting on $100mn bond coupon payment
4 hours ago
A maze of smuggler tunnels: the Kyrgyzstan-Uzbekistan border
4 hours ago
Ukraine's Zelenskiy calls on the US to recognise Russia as a state sponsor of terrorism
5 hours ago
Amnesty International issues damning report on Lithuania’s migration centres
5 hours ago
At least a dozen killed in shopping mall bombing as Zelenskiy urges G7 leaders to impose more sanctions
6 hours ago