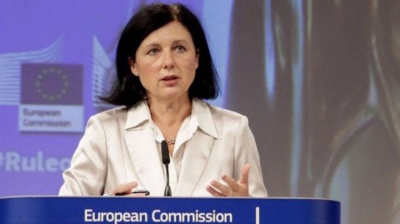 "We will not pay the money" if the milestones are not met, said Commissioner Vera Jourova.
By Wojciech Kosc in Warsaw July 1, 2022

Changes that Poland made to its judiciary reforms are not in line with criteria set out by the European Commission, threatening the release of billions from the EU’s pandemic recovery fund,  Commission Vice President Vera Jourova said on June 30.

Poland has recently overhauled the controversial disciplinary rules applying to the country’s judges. The disciplinary regime was the centrepiece of the government’s judiciary reform and also the main focus of the Commission’s criticism.

Replying to a question by a member of the European Parliament, however, Jourova said directly that overhauling the disciplinary regime – via a law proposed by President Andrzej Duda – did not meet the so-called milestones set out by the Commission.

The milestones are criteria Poland has to meet in order to receive €36bn in grants and loans from the EU’s pandemic recovery fund. The government has made this money one of the cornerstones of its political plan to win an unprecedented third consecutive term in office in the general election due next year.

“Whether President Duda’s law fulfils the milestones for the recovery plan: no, it does not,” Jourova said.

“Poland will have to reflect on the conditions. And if they do not have a sufficient response in the legally binding rules for the Polish judiciary which will correspond with the milestones, we will not pay the money,” Jourova added.

“Poland and all other member states of the European Union have milestones and targets to be achieved. Some [are met] in full, some to a bit smaller extent – which is when discussions and negotiations with the European Commission take place,” Prime Minister Mateusz Morawiecki told a press conference.

“[Jourova’s] statement is detached from the facts. The Commission knew what the reforms were going to be about,” said Jakub Kumoch, the head of President Duda’s foreign affairs office.

It was not the first time that the Commission warned Poland that payouts from the recovery fund are not unconditional.

“Commitments, taken in the form of milestones, have to be fulfilled before any payment can be made,” Commission President Ursula von der Leyen said in Warsaw in early June.

Critics have long warned that changes to the disciplinary regime, proposed by Duda, are merely cosmetic and do not address the core problem with Poland’s judiciary reform, which is the appointment of judges by the National Council of the Judiciary, a body politicised by the ruling majority.

Duda’s proposal, which passed in the parliament in late May, dismantled the controversial Disciplinary Chamber of the Supreme Court, one of the milestones that Brussels demanded Poland met to unlock the funds.

The Commission wanted Poland to disband the chamber, saying that judicial appointments to the controversial body do not meet the criteria of impartiality and independence from the government. The chamber could in effect target judges critical of the government.

Duda’s proposal establishes a new body, the Chamber of Professional Accountability, which will look into disciplinary cases concerning judges.

Critics have argued that the new chamber is just a smokescreen, as the risk remains that appointments to it will come anyway from another compromised body in the Polish judiciary, the National Council of the Judiciary (KRS).

The Commission, with the backing of the EU’s top courts, says that the KRS also suffers from a lack of independence and impartiality, as its members are appointed by the parliament.