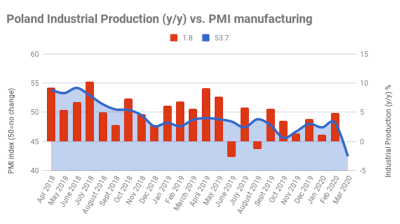 Poland’s manufacturing PMI crashed record 5.8 points to 42.4 in March to the lowest point since April 2009, IHS Markit reported on March 2. The coronavirus (COVID-19) pandemic drove the decline of the indicator, which is likely the first in a series of steeply deteriorated macroeconomic readings to come out this month.

“Data [provide] the first indication of the severe hit to the economy as the coronavirus outbreak accelerated in Europe. Output, new orders and exports all contracted at the fastest rates since December 2008, during the depths of the global financial crisis,” IHS Markit said.

The indicator has now remained below the 50-point line separating contraction from growth for 17 straight months.

“The sharp downturn in demand and workloads in March impacted employment in the goods-producing sector. Employment fell for the ninth month running, and the rate of job shedding accelerated at a survey-record pace to the fastest since July 2009,” IHS Markit said.

The weak data is a harbinger of what is to come later this month when data for industrial production and other segments are published. Major declines are expected in the retail segment in particular while the currently record low unemployment rate is set to begin a sharp increase.

Current forecasts expect the Polish economy going into a major slowdown – or recession, as outlooks still vary – in 2020. Most optimistic predictions see growth in the range of 1%-2% but recession is by no means out of the question, as indicated by the Polish Prime Minister Mateusz Morawiecki earlier this week.