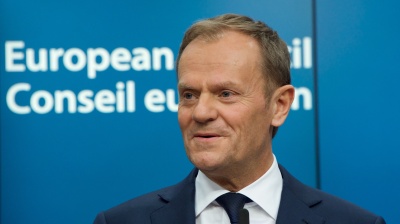 Donald Tusk may be the darling of the great majority of Polish centrists but he is despised by the three main leftwing parties.
By Wojciech Kosc in Warsaw November 24, 2021

Two years before the next parliamentary election, Poland’s opposition parties are facing multiple dilemmas, but all boil down to the simplest of questions: How best do we prevent Jaroslaw Kaczynski's Law and Justice (PiS) from winning a third term in office?

The opposition consists of four main parties or groupings, whose combined support in the polls would almost certainly translate into a majority. It seems obvious that they should therefore join together. And real-life examples of oppositions sweeping aside differences, to argue about them after taking over power, are literally around the corner.

In Hungary, polls show that the united opposition is in a close race with Viktor Orban’s Fidesz, which has ruled Hungary with a supermajority since 2010. The opposition singled out a joint candidate for a prime minister, Peter Marki-Zay, in October, setting up next spring’s general election as a confidence vote in Orban’s rule. A poll aggregate compiled by Politico Europe shows that the opposition is at 45% versus Fidesz’s 50%.

In Czechia, the centre-right opposition took on the government, headed by billionaire Andrej Babis, by joining together in two large coalitions, and convincingly won the election held in October, grabbing 108 seats in the 200-seat lower house of the parliament. The two coalitions are now preparing to rule together.

In Poland, however, the divisions appear either to run too deep, or the parties feel that the two years before the next general vote still give them enough time for a wait-and-see strategy. Indeed, things might be very different at election time, given the numerous crises that the incumbent radical rightwing PiS government is facing, ranging from the pandemic to soaring inflation, to the rule of law row with the EU that is holding up the payment of the NextGenerationEU recovery funds.

In theory, though, to ensure the opposition defeats PiS, it would be more than enough to run a single list that would enable the different electorates to come together to prevent another four years of PiS rule, and would reap the extra mandates that Poland’s electoral system, based on the d’Hondt model, would provide.

Some observers say that with this election system, in fact the opposition has no real choice. In 2015, one of the key reasons for PiS’ success was the liberal electorate splitting between Civic Platform (PO) and the Nowoczesna (Modern) party. While Modern has since merged with PO to form the Civic Coalition (KO), a similar split is now on the cards between KO and Polska 2050, both sharing very similar-minded voters.

But in practice things might not work out quite so neatly. “The problem is that electorates aren’t pieces on a chessboard that you can move around,” says Alex Szczerbiak, professor of political science at Sussex University in the UK, who specialises in Polish politics.

KO is Poland’s biggest and most popular opposition party, bringing together a fairly diverse centrist group of liberals, conservatives, and Greens. KO’s biggest constituent is PO, the party that ruled for two terms before PiS took over after a powerful campaign addressing PO’s shortcomings, its lack of attention to lower income voters in particular. PO’s leader is the former President of the European Council and one-time Polish Prime Minister, Donald Tusk.

There is a popular notion among parts of the opposition that a united front of opposition parties would in practical terms be too PO-heavy and that this would mark a return to the kind of politics that arguably laid the foundations for the populist takeover by PiS.

That is why another very similar centrist group, Polska 2050 – which bills itself as a citizens’ movement opposed to traditional party politics and headed by a political newbie, the former TV celebrity and “progressive Catholic” Szymon Holownia – has distanced itself from PO up until now.

Yet political analysts predict that some kind of deal between the two liberal parties would make sense. “I can very well imagine KO and Polska 2050 striking a pragmatic deal for the election,” says Szczerbiak.

Tusk’s return to domestic politics fuelled a lot of hope on Poland’s centre-right that, under a charismatic leader, a successful challenge to PiS could be mounted. Yet Tusk’s star has faded recently. He may be the darling of the great majority of Polish centrists but he is despised by the three main leftwing parties, which have come together in a catch-all party called The Left.

The Left has considerable qualms about running against PiS hand in hand with PO, which, they say, provided PiS with a fertile ground to grow on and is still stuck in a now discredited neoliberal mindset.

The lack of trust goes both ways, says Szczerbiak. “The leadership of the Left, especially its more liberal-minded wing, is worried that running with PO could end up in the liberals devouring them. Also, I think Tusk doesn’t really want an alliance with the Left. I don’t think he likes it, let alone trusts it,” Szczerbiak says.

For now, the pragmatic approach for the opposition seems to be to not alienate too many voters in the process of building a single group to face off against PiS – unless the leftist voters could be sold on the united opposition’s once-in-a-lifetime chance to get rid of PiS.

“I think that for the leftist voters it might turn out that defeating PiS would be motivating enough to vote for a single opposition list and accept that the biggest part of it would be PO,” Szczerbiak says.

If that doesn’t work, however, the opposition could possibly be best off by going to the election divided into two groups, one led by PO and the other, smaller, one, led by the Left.

“What will – possibly – happen is that the Left will stand with a separate election ticket to the centre led by PO with Polska 2050. The risk for the Left would be, however, to convince their voters not to vote for the centrist list that will be presented as the solution to end PiS’ rule,” Szczerbiak says.

Current polls still give PiS the lead over the opposition but without a clear majority in the parliament, with some polls indicating that would be impossible even with the far-right Konfederacja, the likeliest coalition partner for PiS.

PiS is averaging 33% of the vote in recent polls ahead of KO’s 23%, Poland’s poll-gathering website ewybory.eu shows. Polska 2050 is next at 13%, followed by the Left and Konfederacja, both at 8%. The Polish People’s Party is at 4%, just below the threshold to enter parliament.

OUTLOOK 2022: POLAND
14 hours ago
OUTLOOK: 2022 Uzbekistan
1 day ago
Ukraine's Spell Chocolate sweetens market position with support from EBRD and Sweden
2 days ago
Perspectives | Why Uzbekistan does not fear a ‘Kazakh Winter’
2 days ago
Turkey-Armenia talks seen as key to opening up regional transit links
3 days ago