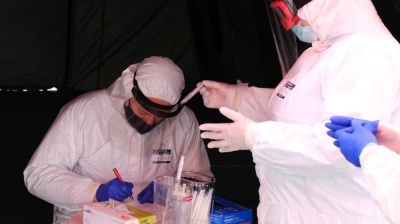 Miners were tested for coronavirus at special mobile points in in Rybnik, Katowice and Gliwice.
By Wojciech Kosc in Warsaw May 13, 2020

Poland registered 595 new coronavirus (COVID-19) cases on May 12 after the epidemic continued to spread fast among miners in the southern region of Upper Silesia, Poland’s coal production hub.

Nearly 83% of the new cases were confirmed in Upper Silesia, where work in five coal mines had to be put on hold in order to curb the spread of the virus. Europe’s largest coal miner PGG manages three of the affected coal mines, the other two belong to Weglokoks Kraj and the listed coke coal producer JSW.

Poland’s coal companies have come under criticism for falling short of introducing safety measures during the earlier stages of the coronavirus epidemic. They are now grappling with the fast-spreading infections that are undermining their business, already weakened by utilities’ preferring cheaper imported coal, mild winters and the development of renewable sources of energy.

Together with the depressed demand for electricity because of the coronavirus lockdown, those are the factors that are reducing demand for domestic coal in Poland. The country’s hard coal mines – most are located in Upper Silesia – produced 43.84% of electricity in Poland in April, down nearly 4pp y/y, data from the grid operator PSE showed earlier in May.

Some 8mn tonnes of unsold coal are currently piled up at the mines as well as in the government-managed so-called central coal deposit in the town of Ostrow Wielkopolski, central Poland.

The Law and Justice (PiS)-led government has promised to come up with a new strategy for the ailing coal sector by the end of June, as it is trying to calm down the fuming mining unions. The unionists demand measures be taken to stop utilities importing coal from countries like Russia so that demand for domestic production improves.

But Poland’s utilities are under pressure to manage rising costs of generating electricity from coal in the environment of the tightening climate policy of the EU. Brussels is seeking eradication of the fuel from the bloc’s energy mix in order to quash carbon dioxide emissions harming the climate. They are also seen as increasingly interested in upping capex for renewable energy capacity.

Poland produced 74% of its electricity from burning hard and lignite coal last year, the highest ratio in the EU. With Brussels aiming at stepping up the emissions reduction rate, Polish coal is in for even bigger pressure in the coming years.

Last week, the management of PGG struck a deal with its unions, which agreed to take a pay cut and shorten the working week in order to qualify for the government’s help for businesses affected by the coronavirus.

That appears to be a temporary ceasefire, however. The deal is only for the month of May, with the PiS government under pressure not to alienate over 80,000 miners and other mining employees ahead of the presidential election, expected to take place in June or July.

With tens of thousands of votes at stake and the presidential contest looking increasingly tight for the PiS-allied incumbent President Andrzej Duda, the government is likely to present some sort of restructuring strategy that will not call for mine closures right away.

LONG READ: Serbia’s hijacked protests
2 days ago
Divided Poland to choose more turmoil in presidential election on Sunday
4 days ago
No enthusiasm for July 15 election in North Macedonia amid relentless coronavirus epidemic
4 days ago
Mongolia to go ahead with Naadam festival, but with no tourists
7 days ago
Protests pose unprecedented threat to Turkmenistan’s authoritarian government
7 days ago