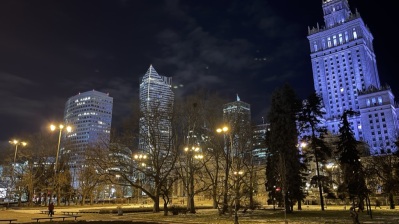 Downtown Warsaw at night
By Wojciech Kosc in Warsaw May 23, 2022

Poland’s economy is doing surprisingly well, in a year in which the COVID-19 pandemic finally ebbed, only for war to ravage neighbouring Ukraine.

But now an array of factors – some of them originating in the pre-coronavirus era – could combine to plunge Central Europe’s largest economy into a second recession after the one that took place during the start of the pandemic.

Inflation, or more precisely, drastic measures undertaken by the National Bank of Poland (NBP) to contain it, is a key risk, analysts say.

Inflation had been on the rise before the pandemic began, after which lockdowns stifled economic activity and with it price growth. To stimulate the economy and avert mass unemployment, the government rolled out one of the most generous support programmes, equal to over 11% of the country’s 2020 GDP of €563bn. Concurrently, the NBP slashed its reference interest rate to an all-time low of 0.1%.

Inflation began rising again in mid-2021 amidst the post-pandemic economic recovery. The recovery drove up demand for goods and services – itself a pro-inflationary factor – with supply chains still severely disrupted, which exacerbated price growth. Rallying energy prices and the low base effect contributed as well.

As the CPI climbed steadily, the NBP’s governor Adam Glapinski had none of it, claiming that price growth was about to peak without even the central bank intervening. Soon, however, the NBP was forced to tighten its ultra-lenient policy and hiked interest rates for the first time in over a year in October.

Since then, seven successive hikes followed in what appeared panicky moves after months of soothing rhetoric that were gradually more and more detached from reality.

In the meantime, Russian President Vladimir Putin thought the time was ripe to launch his “special operation” against Ukraine to what he expected would only be some grumbling from the West, after which things would go back to normal. He miscalculated and the disruption caused by the war added more fuel to the inflation fire.

As Polish inflation climbed to 12.4% y/y in April with a peak expected at 15% at least – some analysts are predicting 20% – the current level of interest rates, 5.25%, appears far from an effective tool to ease price growth soon.

In effect, more tightening is virtually certain. But ever-higher interest rates are going to affect economic activity, household consumption in particular, as growing mortgage repayments will dent households’ ability to spend on goods and services.

Poland is in for a double whammy, then. Rampant inflation has already eaten into household incomes, while more expensive credit will tighten wallets. Eventually – according to analysts, in the third quarter of 2022 – that will bring about an economic slowdown. The question is, how deep?

“The risk of recession is clearly growing, which means not only a decline in GDP but also job losses. This recession can take very different forms – shallow and relatively inconsequential, or deep, with a considerable societal cost,” analyst Ignacy Morawski wrote in the newspaper Puls Biznesu on May 8.

The NBP’s new inflation and economic growth projections, due in July, will offer some insight into how much the central bank has come to terms with inflation not going away anytime soon and growth being about to falter.

The baseline scenario still appears to be that of a mild recession, if there is one at all. Poland’s GDP expanded a very robust 9.1% y/y (seasonally adjusted) in the first quarter, brightening the outlook for the rest of the year.

Robust growth was still a carry-over of very solid activity in the second half of 2021, putting the Polish economy on a path to an expansion of even 5% in the full year 2022, analysts say.

“April data confirm that the exceptionally good economic situation in the domestic industry will cool down as a result of limited production capacities due to bottlenecks in supply chains and the increasingly stronger demand-side factors,” Bank Millennium said last week in a comment on the industrial production figures.

Still, the second quarter is expected to be strong enough to keep full year’s growth at 4.5%-5%, analysts say. If a recession happens, it will only be “technical”, with, perhaps,  contraction taking place only in the third and fourth quarters.

But even that appears a fairly unlikely scenario, as the Polish economy is well suited to weather a storm, Puls Biznesu’s Morawski wrote.

“There are a couple of ‘airbags’ that will protect us from a deeper collapse: refugees-driven consumption, hopefully upcoming new public investments financed by European funds, and a reshuffling of industrial supply chains to Poland’s advantage,” the analyst wrote.

Kremlin VTB bank to be hit by investor class action for seizing foreign shares
12 hours ago
Russian metal giants Rusal and Norilsk Nickel could merge under sanctions
12 hours ago
US and Chinese slowdown will tip the world into recession, says IIF
4 days ago
NEO: Rising in the East, Setting in the West: Russia strengthens trade with Global East
5 days ago
Stagflation fears continue to rise
5 days ago