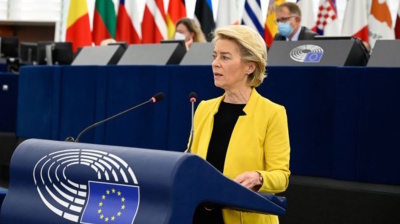 “You’re arguments are not getting better. You’re just escaping the debate,” von der Leyen told Morawiecki towards the end of the debate.
By Wojciech Kosc in Warsaw October 19, 2021

The dispute over the rule of law and the primacy of the EU’s legal order did not move an inch closer to being resolved on October 19 after Polish Prime Minister Mateusz Morawiecki took the floor in the European Parliament to offer explanations as to why he thought Poland was right to change its judiciary as it sees fit.

Morawiecki offered the President of the European Commission Ursula von der Leyen and the MEPs a broad picture of the EU as a mix of constitutional orders over which Brussels can only have so much say.

“EU competencies have clear boundaries, we must not remain silent when those boundaries are breached. We are saying yes to European universalism, but we say no to European centralism,” Morawiecki told the EP in a speech.

Morawiecki thus repeated the main point of a letter he sent on the preceding day to EU leaders in which he assured them Poland was a “loyal member state of the EU” adhering to EU laws, recognizing their primacy over domestic laws “pursuant to our common obligation under the Treaty on European Union”.

Just as the PM stuck to his guns, so did the Eurocrats, with von der Leyen leading the charge. At stake, she said, is billions in EU taxpayers’ money, about which there must be no doubt how Poland will spend it.

“You’re arguments are not getting better. You’re just escaping the debate,” von der Leyen told Morawiecki towards the end of the debate.

Von der Leyen also told the plenary that the Commission would not hesitate to act to withhold the cash if necessary via a number of legal means available, including Article 7, which suspends a member state in its rights for trampling on the basics of the EU Treaty, and infringement actions before the Court of Justice of the European Union (CJEU).

The EU has already begun moving in that direction. “It’s a question of days or weeks, maximum,” EU Justice Commissioner Didier Reynders told Bloomberg recently on when Brussels might launch the new so-called conditionality mechanism against Warsaw, which enables it to restrict funding if a state violates the rule of law.

The mechanism, which Poland is challenging in the CJEU, sets objectives to meet if member states are to receive funding. All told, Poland could at least face big obstacles and delays in getting €36bn from the bloc’s pandemic recovery fund and some €70bn from the 2021-2027 budget of the EU.

The origins of the bitter spat go back to 2016, when the Polish government, led by Law and Justice (PiS), hijacked the country’s top court, the Constitutional Tribunal. As questions began flowing from Brussels, the dispute has evolved into a test case of whether a member state can simply upend the legal order it had subscribed to.

Poland joined the EU in 2004 and has been a major beneficiary of  accession. Billions in EU funding have helped build infrastructure, start countless companies, improve the state of the environment and achieve many more positives.

By and large, Poles and their subsequent governments thought of the membership as a long-overdue act of historic justice. Destroyed by Nazis and subjugated by the Soviets, Poland always belonged to “Europe” – as the old 15 member states were often referred to.

When Brussels launched scrutiny of PiS’ judiciary reforms – which the government tries selling as making courts more efficient and accessible to rank and file Poles – Warsaw woke up to the long-dormant school of thought in Poland that as times goes by, the Eurocrats in Brussels tend to usurp more and more power over member states.

Poland says that the European Commission must not extend its competences into judicial affairs and that the CJEU must have no say whether the Commission can do this. Poland not only has ignored a number of CJEU’s rulings on the matter but it has also ignored the bloc’s top court’s ruling on an unrelated issue of a lignite mine draining water resources over the border with Czechia.

Finally, earlier this month, the Constitutional Tribunal – with the legality of its line-up also being questioned – ruled that some articles of the Treaty of the European Union (TEU) – the bloc’s legal cornerstone - are incompatible with the Polish Constitution.

That sparked speculation about “Polexit,” or Poland leaving the EU. Morawiecki denied that Polexit is anything even remotely possible in the EP today.

Despite grandstanding as defenders of EU as a union of sovereign states before Eurocrats’ ambitions to make it a superstate, Morawiecki, Poland’s shadow leader Jaroslaw Kaczynski, and the rest of the PiS leaders are walking on thin ice politically.

The dispute over the judiciary reforms and primacy of EU law could undermine their position domestically if Brussels withholds billions from the pandemic recovery fund and enforces conditionality on the use of other funding.

“The deepening rule of law dispute between Warsaw and Brussels heightens the risk of further restrictions on Poland’s access to EU funds. Reduced EU funding and rising concerns about Poland’s future membership in the EU could erode voter support for the ruling Law and Justice party in the medium term,” analyst company Teneo wrote about the possible outcome of the legal spat.

"PiS could seek compromise with Brussels to keep EU funds flowing, although this would be more difficult after the latest ruling of the Constitutional Tribunal and could result in tensions with the nationalist coalition partner United Poland,” Teneo wrote.

Another option for the government might be an early election sometime in 2022 – a year ahead of schedule – seeking to secure a new and/or strengthened four-year mandate before the reality of trimmed money flows from the EU dawns on the voters.