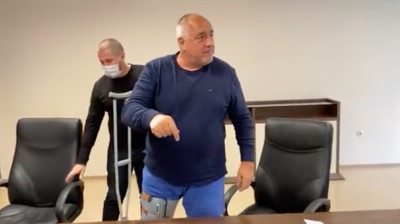 Bulgaria’s outgoing Prime Minister Boyko Borissov appeared at an online briefing on April 20 to propose a new government informally clad in just a t-shirt and a small pair of blue shorts, apparently to accommodate a leg injury.

Borissov used the online event to present his proposal for a new government to be led by his former foreign minister Daniel Mitov. After his Gerb party performed poorly in the April 4 general election — taking the largest share of the vote but not gaining enough seats to form a government — it’s unclear how a cabinet headed by Mitov would gain the support of the parliament.

Mitov received the mandate to form Bulgaria’s next government from President Rumen Radev on April 20. He said after receiving the mandate that his party will look for support from the reformist Democratic Bulgaria. However, the formation has repeatedly said it will not participate in any coalition that includes Gerb, the ethnic-Turk Movement for Rights and Freedoms (DPS) and the Bulgarian Socialist Party (BSP). Moreover, no other party has said it will join a coalition with Gerb, which took 26% of the vote on April 4, giving it just 75 MPs in the 240-seat parliament.

Post-election, Borissov is stepping down after more than ten years as prime minister, following a third term that was marred by numerous corruption scandals and months of mass anti-government protests.

However, he remains the party’s leader, and said in the video — in which he appeared in front of members of Gerb’s proposed next government — that he and Mitov had discussed a potential comeback.

“I shall come back one day – I’ll stop limping, I’ll get rest. When I mobilise, when is seen what the others can, I shall return. As what – it doesn’t matter,” Borissov said in the video live streamed on his Facebook profile.

Borissov was admitted to hospital late on April 19 apparently after sustaining knee trauma during a football match. He limped into the room, supporting himself on crutches and wearing a leg brace. According to information from his party, he had undergone surgery before the video was shot.

The video drew accusations of arrogance as the outgoing premier appeared to berate the members of the proposed cabinet for their inexperience and lack of expertise.

“You are candidate-premiers, ministers, vice premiers, but are now listening to me now. Not because I am physically stronger but because I have proven my wisdom over all these years,” Borissov said.

“A premier in shorts… He will be remembered, no arguing with that,” Elena, a Bulgarian woman who preferred to be known only by her first name, told bne IntelliNews.

Borissov’s appearance after surgery aroused strong sympathy among his supporters.

“Even after surgery Boyko Borissov is still on the line — to explain, to emphasise the qualities of worthy personalities! The represented ministers are experts, professionals with experience. Only fools would not support this cabinet,” one of his supporters wrote below the video of Borissov’s presentation of the new government.

On the other hand, critics of the outgoing prime minister claimed the injury could have been faked, ahead of his summons to the parliament on April 21 to answer MPs’ questions regarding Bulgaria’s current economic situation and the recovery plan the outgoing government is supposed to submit to the EU.

Photos have been released showing the outgoing prime minister walking by himself to the hospital and holding a crutch on the wrong side after his surgery, supporting his healthy leg.

“[Famous Bulgarian actress nominated for Oscar] missed the Oscar but now it will be given to Borissov,” writer Bella Cholakova commented.

According to the constitution, if Borissov fails to show up at parliament after being formally summoned and without having a good excuse, he can be brought there by the police. A few days earlier, he said he would go and complained that, in his opinion, the parliament does not want to know about the recovery plan but to turn itself into a “people’s tribunal”.

There is even speculation that Borissov is well aware of his bizarre behaviour and is doing it on purpose in order to plead insanity if brought to court.

In a final perplexing comment during the presentation, Borissov said his opponents wrongly claimed he had read just one book, saying the novel comprises two volumes. The outgoing prime minister has repeatedly said over the years that the only book he has read is Winnetou by Karl May, the story of a young Apache chief written in the late 19th century, which in Bulgaria was issued in three volumes.