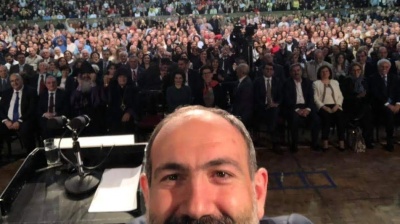 A selfie taken by Armenian PM Pashinian at the Armenia Centre in Tehran.
By bne IntelliNews February 27, 2019

Armenian prime minister of less than a year Nikol Pashinian signed two memoranda of understanding (MOUs) with Iran at the presidential palace in Tehran on a trip during which he examined the potential for badly needed economic growth which his post-revolution administration might find with his country’s southern neighbour.

Iran and Armenia have unique relations. Although they are majority Shi’ite Muslim and Christian (largely Armenian Apostolic Church), respectively, they enjoy a warm relationship. That’s certainly the case when Iran’s relations with Shi’ite neighbour Azerbaijan are compared. Yerevan’s arch rival has at times had a contentious relationship with Tehran.

The MoUs were signed by the Institute of Standards and Industrial Research of Iran and the Ministry of Economic Development and Investment of Armenia.

In addition, the High Council of Free Industrial and Special Economic Zones of Iran and the Armenian ministry signed cooperation agreements.

Armenia, which has no diplomatic relations with neighbours Azerbaijan and Turkey and must tread carefully when it comes to another neighbour, Georgia, given strategic partner Moscow’s difficult relations with Tbilisi, remains a poor country that hopes to significantly boost economic growth with Iran, despite opposition that might be encountered by the Islamic Republic’s arch-foe, the US.

Anti-corruption activist Pashinian, who came to power after the velvet revolution experienced by his country during spring last year, said of growing trade between Iran and Armenia: “I must state that the government of Armenia appreciates the implementation of foreign investment projects, including the Iranian investment programmes. Armenia has the necessary technical, economic and professional potential for cooperation in these areas”

He added: "Recently, in December 2018, an Armenian-Iranian joint venture for the production of gas cylinders on a plastic basis was opened in Vanadzor, Armenia. The founders of the plant have given assurance that production will start in the near future.”

Some 200,000 Armenians live in Iran. They make up the country’s biggest ethnic minority after Azerbaijanis. Despite being Christian, the Armenians have been left to their own devices. That was even the case after the 1979 Islamic Revolution. The Armenians enjoy significant autonomy in their day-to-day lives. This helps Iran remain in good favour with Armenia.

Trade between Iran and Armenia hit $364mn in 2018, Iran’s commercial attache to Yerevan said ahead of Pashinian’s visit. "Iran’s exports to Armenia accounted for $269mn. Our main exports included natural gas, petrochemicals, iron and steel, tar, tiles and ceramics, fruit and nuts," an Iranian official was quoted as saying by IRNA on February 26.

Inbound tourism was also high on the agenda of the Armenian PM during his trip to Iran, despite a downturn in outbound Iranian travellers due to the currency crisis that has hit the country amid US sanctions.

“Following the visa abolition arrangement in 2016, the number of Iranian tourists visiting Armenia has considerably increased, especially in the days of the Iranian New Year, Nowruz,” Pashinian added.

In the past couple of years, more than 200,000 Iranians have visited Armenia annually during the new year break, with a 16% y/y increase recorded last year, according to official Armenian data. Iranians, for instance, very often follow their favourite domestic bands into the South Caucasus when they journey out on regional tours.

The US Senate on December 12 unanimously passed a resolution recognising the mass killing of Armenians in the Ottoman Empire a century ago as genocide. Armenian Prime Minister Nikol Pashinian ... more

Speculation is mounting that Turkey’s President Recep Tayyip Erdogan may call off a White House visit scheduled for next week. The reason given would probably be a protest against the recent ... more