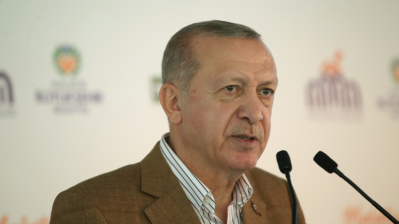 Erdogan seen making the address in which he attacked the "individual called Macron".
By bne IntelIiNews October 25, 2020

Turkish President Recep Tayyip Erdogan’s comment that French counterpart Emmanuel Macron needed mental health treatment caused France on October 25 to recall its ambassador from Ankara for consultations, with Paris saying the remark and others were “unacceptable” and insulting.

Among numerous ongoing rows between Erdogan and Macron, particularly over Turkey’s aggressive moves in eastern Mediterranean gas exploration in contested territory, Syria, Libya and the Nagorno-Karabakh conflict, Ankara has been angered by a campaign championed by Macron to defend France’s secular values against radical Islam with the French president earlier this month describing Islam as “a religion in crisis”. The debate on this took on new urgency after the beheading of a teacher in France who showed his class a cartoon of the prophet Muhammad. Paris has noted that Erdogan offered no condolence or support after the shocking murder. If tempers do not cool, there is a growing risk that Turkey could face EU sanctions by the end of this year.

In an incendiary address on October 23, Erdogan said: “What else can one say about a head of state who treats millions of members from different faith groups this way: first of all, have a mental check.

“What’s the problem of the individual called Macron with Islam and with the Muslims?” he asked. “Macron needs mental treatment,” Erdogan added, while indicating he did not expect the French leader to be re-elected in the 2022 elections.

Erdogan also stated: “You are constantly picking on Erdogan. This will not earn you anything. There will be elections [in France] … We will see your [Macron’s] fate. I don’t think he has a long way to go. Why? He has not achieved anything for France and he should do for himself.”

In domestic politics, Macron needs to show that he can challenge Islamic extremism just as effectively as his political opponents on the right. Erdogan, meanwhile, is seen as trying to distract Turks from their wretched economic situation with adventurism in international affairs and an effort to portray himself as the leader of the Sunni movement in the Islamic world.

French officials said in a statement to AFP: "President Erdogan's comments are unacceptable. Excess and rudeness are not a method. We demand that Erdogan change the course of his policy because it is dangerous in every respect."

There have been calls on social media for Turks to boycott French goods and Qatar, a close ally of Turkey, has postponed a French cultural week.