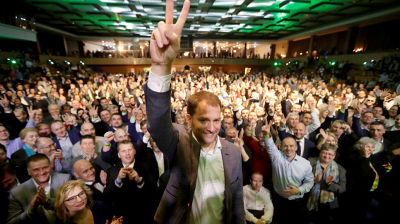 The Slovak general election at the weekend produced an upset as the opposition party Ordinary People and Independent Personalities (OLaNO) won with a vote share of 24.8%, ousting ruling party Smer-SD which won 18.9%.

The parties that passed the 5% vote share threshold and will also enter parliament were We Are Family with 8.4%, the far-right People's Party Our Slovakia (LSNS) of Marian Kotleba with 8.3%, Freedom and Solidarity (SaS) 5.6% and For the People of former president Andrej Kiska 5.4%.

Liberal coalition Progressive Slovakia-Together with 6.22% has not made it to parliament, coming in short of 926 votes - it did not receive a vote proportion of at least 7% as a coalition of two parties. The Christian Democrats (KDH) gained 4.82%, below the 5% threshold.

“We beat Smer-SD after 12 years. We had two goals: to beat the Smer-SD mafia and to take away voters from Marian Kotleba. It’s clear now that we’ve succeeded,” said OLaNO chair Igor Matovic, the Slovak News Agency quoted.

He stressed that OLaNO is capable of forming the next government and wants to have a constitutional majority in Parliament (at least 90 votes). OLaNO is supposed to start talks on the formation of a new government with potential coalition partners later on Sunday.

Matovic ruled out post-election cooperation with Smer-SD, stressing that he wouldn't negotiate with the mafia. He will more likely form a coalition with opposition parties, with We Are Family of Boris Kollar, SaS and For the People.

“We could do it without Boris Kollar but I want him in the government. We need a constitutional majority in Parliament, it’s essential because we need to cleanse the judiciary. Boris Kollar will be the first one whom I’ll address to take part in this. People demand that we tidy up Slovakia,” said Matovic.

The Prime Minister Petr Pellegrini (Smer-SD) ascribed Smer's relatively poor election results to pressure from the opposition, the media and NGOs. “There was an overall anti-Smer atmosphere,” he stressed. Smer-SD chair Robert Fico has not appeared before journalists during the votes counting.

OLaNO won in 50 out of 79 Slovakia's districts. Smer-SD won in 25 districts, the Hungarian Community Solidarity in three districts and Progressive Slovakia-Together in one.

The highest turnout was seen in Bratislava's Old Town - 78.75%, while the lowest was posted in the district of Revuca (Banska Bystrica region) - 51.34%. The overall turnout in the general election reached 65.8%.