OPINION: PM's resignation is a make-or-break moment for Georgia 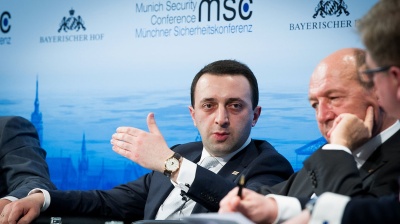 Georgia has just had its fifth change of prime minister since Georgian Dream (GD) came to power in 2012. Irakli Garibashvili, who previously held the position from 2013 to 2015, is back.

Since Bidzina Ivanishvili, the founder of GD and its first PM, resigned in November 2013, it has been widely presumed that he continues to be the principal decision-maker behind the scenes, prime ministers being expendable managers rather than true political leaders. Of them, Giorgi Kvirikashvili stayed the longest, at two years and five months. Giorgi Gakharia, who resigned on February 18, could not even make it to the year-and-a-half mark. Based on this experience, another change should not be a big deal.

However, this one is different. Gakharia was the first to resign on a specific political issue and in a very dramatic moment. He announced his decision when the government was trying to arrest Nika Melia, the chairman of the strongest opposition party, the United National Movement (UNM). Representatives of virtually all opposition parties and civic activists gathered in the UNM headquarters to resist the arrest. The PM said that he was resigning because he failed to convince his political team that under the circumstances, arresting the leader of the opposition would not be wise. [Editor's note: security forces grabbed Melia from his barricaded party HQ very early on February 23].

Later, he also explained his decision on Twitter in English: “I believe that confrontation and rivalry within the country endanger the future of [Georgia]'s democratic & economic development. Therefore, I have announced my resignation in the hope to reduce polarization & de-escalate the situation.” However, no such de-escalation is in sight.

Garibashvili was chosen as the next prime minister by the ruling party on the same day as Gakharia's resignation. He is Ivanishvili’s former personal assistant whose main distinction is unswerving loyalty to his boss. This loyalty was put to the test when, in December 2015, he was pushed to resign, without mentioning any reason for this in his resignation statement. Between then and March 2019, when he emerged as the political secretary of GD (in September the same year he became the minister of defence), he was seldom seen in public. Ivanishvili is known for inexplicable changes of moods towards his lieutenants; but whatever the reason behind his punishing of Garibashvili in 2015, by now Garibashvili appears to have been fully rehabilitated.

Garibashvili is also known for especially belligerent attitudes towards the opposition and civil society. As a PM-designate, he quickly referred to the UNM as a “criminal force”, as he has done on many occasions. He had earlier said that so-called “cohabitation” was the main mistake of the GD government and this had to be corrected: In government supporters’ jargon, this term stands for the recognition of the UNM as a legitimate political actor. He is also known for attacking civil society organisations.

To be sure, Garibashvili is not the only GD politician who is aggressive towards government critics, but he usually outperforms them on this account. This has also made him a champion of far-right forces, like the Asaval-Dasavali newspaper that has frequently assaulted relatively liberal representatives of the GD but has hailed Garibashvili as a true patriot.

The change was generally anticipated. There had been persistent rumours in recent months that Gakharia, who had become an increasingly isolated figure in the government, had lost Ivanishvili’s trust and would depart soon; Garibashvili was often presumed to be a likely replacement. However, the current circumstances made it much more meaningful than it would otherwise have been.

In this dramatic moment, Gakharia’s resignation – even though nobody in the ruling team shared his reservations – was a painful blow for the government. Gakharia had a reputation as a hard-liner himself. His public image was defined by the so-called “Gavrilov night” of 20-21 June 2019 when in his capacity as the minister of internal affairs he led a violent dispersal of the protest demonstration, which, as many critics alleged, was unnecessarily heavy-handed. Coming from this kind of person, the criticism of the government's actions as excessively severe was rather embarrassing. The opposition perceived this as its moral victory.

Moreover, it was a signal for heavier criticism from the West. When the opposition declared the October 2020 parliamentary election fraudulent and refused to take their seats in parliament, the international community considered this a misjudgment and urged the opposition to “work through the institutions”. This was the first case in a long time when the GD could claim the West was supporting it in its stand-off with the opposition. Apparently, they saw this as a chance to divide the opposition by enticing smaller opposition parties into parliament and fully marginalising the UNM (they largely failed in this). They also might have considered this a good time to strengthen pressure against the opposition by reviving charges against Melia that go back to the mentioned “Gavrilov night”.

This strategy backfired. The threat of Melia’s arrest unified the opposition and, moreover, triggered a new wave of criticism from Western politicians and diplomats. Gakharia’s resignation may serve as a signal for this criticism becoming stronger – this is already happening. Lithuanian Seimas Foreign Affairs Committee chair Zygimantas Pavilionis came to Tbilisi to convince both sides to compromise and renew foreign-facilitated post-election talks. He also raised the possibility of sanctions if the government went forward with its plans to arrest the opposition leader.

Garibashvili’s appointment and the GD rhetoric in the following days signal that GD is in no mood for compromise. This may still change; but this would require, in addition to unity, perseverance, and prudence from the opposition, stronger pressure from the EU and US. The weight of Lithuania, or individual western politicians who voiced their concerns, may not be sufficient.

Whatever the outcome, there is a widely shared perception that this may be a make-or-break moment. Georgia may take a significant step towards becoming a more autocratic country and its European future may be seriously jeopardised. Or, there will be yet another opening.

Ghia Nodia is Professor of Politics at Ilia State University in Tbilisi and the head of independent think-tank Caucasus Institute for Peace, Democracy and Development. This comment piece first appeared on the website www.3dcftas.eu.

FPRI BMB Ukraine: How well could Ukraine defend itself against a Russian attack?
8 hours ago
Romanians gripped by cryptocurrency euphoria during the pandemic
1 day ago
BORDERLEX: EU Commission goes back to the drawing board to revive Turkey trade talks
1 day ago
COMMENT: Strengthening the foundation of the Uzbek capital markets infrastructure
2 days ago
COMMENT: Fresh US sanctions and OFZ primary market ban a global non-event, but sanctions possibly now entrenched quasi indefinitely
4 days ago