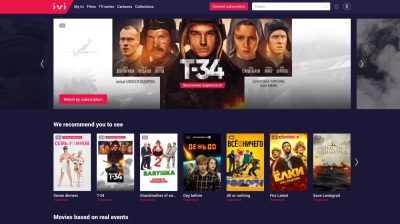 Known as the Netflix of Russia, ivi.ru is the leading online video streaming and will join an increasing number of other Russian tech companies by listing on the NYSE soon
By East West Digital News in Moscow December 2, 2020

No IPO-related documents related to Cyprus-registered company ‘ivi.ru Media Ltd’ are available yet on the SEC’s website, but two unnamed sources “close to the company” confirmed, in an exchange with Russian business publication RBC, a move that was widely expected following previous leaks.

One of RBC’s sources says the IPO should take place in the first quarter of 2021.

Leadership on a small market

Russia’s largest video streaming platform in terms of revenue, ivi.ru generated last year 6.1 billion rubles ($95 million) in revenues, VAT excluded, up 55% from 2018. The average monthly audience of the service grew by 14%, exceeding 50 million unique users as of late 2019. The total viewing time for the year amounted to 1 billion hours, including 400 million hours accounting for a paying audience, according to the company.

Ivi.ru could be valued at more than $700 million, according to analysts who talked with the Russian media in early 2020.

Despite the unfavorable geopolitical context, several Russian digital companies raised substantial amounts on Western exchanges in the past years — or are considering doing so in the future.

The latest cases include HR platform hh.ru, which went public on the NASDAQ in June 2019; Yandex, which raised there $460 million in June 2020; and Mail.ru Group, which is about to raise $600 million on the London Stock Exchange.

Yandex.Taxi, the promising ride-hailing company of Yandex and Uber, was actively preparing its IPO last year. The listing, initially scheduled for 2020, has however been postponed due to market conditions surrounding the coronavirus pandemic.

In its triumphant IPO earlier this week, Ozon saw its shares jump 40% in first minutes of trading.

This article first appeared in East-West Digital News, a partner of bne IntelliNews

Ultra-fast broadband access will reach about 90,000 households in rural areas.

“These days, the internet is like oxygen for people,” adds Rouhani protesting at move against cabinet member who allegedly refused to block Instagram.

Elbrus Capital, a leading private equity firm focusing on Russia and neighbouring countries, has attracted $260mn to launch its third fund. As reported by business daily Kommersant, the firm aims to raise $600mn in total by the end 2022.