One in seven workers in Eastern Europe report delayed paychecks 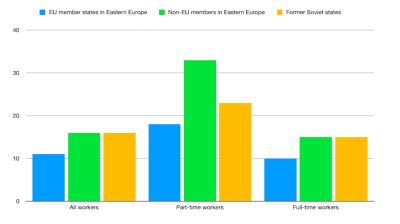 One in seven workers in 29 countries across Central and Eastern Europe and the former Soviet Union experienced delayed paychecks in 2017, according to a Gallup poll of the region.

14% of workers surveyed by the international pollster said there were times in the past month that their employers delayed paying them money for the work they had done, revealed the study published in late December.

Part-time workers were disproportionately affected by pay delays, with 22% saying they had received late pay, compared to 14% of full-time workers.

The situation is generally better in the EU member states of the region, where 11% of workers (10% of full time workers and 16% of part time workers) reported delays in paying salaries.

However, the report pointed out “the current situation in Hungary demonstrates how workers in EU member states are not exempt”. The Hungarian parliament recently approved legislation that will allow employers to wait up to three years before paying overtime. The legislation, dubbed the “slave law” by its opponents, has sparked weeks of mass protests in Hungary.

In addition to location, gender was another determining factor; 17% of male workers reported pay delays, compared to 12% of female workers.

Education level was also relevant. “Workers with college degrees or higher education — who may be more likely to be in higher-earning, white-collar jobs — are at least half as likely as those with primary education or less to have had their paychecks delayed,” Gallup said.