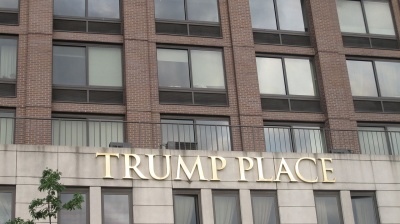 After a vote by condominium owners the Trump name was removed from the building's facade.
By bne IntelIiNews May 27, 2020

TURAN reported on May 26: “Following a recent social media discussion on Mammadyarov family's wealth and their Manhattan apartments, which was first broke by journalist Javansir Hasanli, TURAN's U.S. correspondent has reached out to New York authorities for more details regarding the deeds of the 31-year-old son of the minister.

“According to official records, during the months of June-July [in 2015] Emin Mammadyarov purchased two apartment units (PH2K and PH3K) at Manhattan's former Trump Place building located at 120 Riverside Blvd.”

Built in 2004 by the Trump Organization, the 21-storey building has en suite amenities including an indoor pool, fitness centre, sauna and jacuzzi and a private landscaped roof deck which overlooks the Hudson River.

Last year, the name “Trump Place” came down from the building’s facade after the condominium owners voted to have the name removed, citing Donald Trump's offensive behaviour in the 2016 US presidential election campaign.

TURAN also reported: “It is not clear how young Mammadyarov could pay huge sums for luxury units in Manhattan. TURAN's correspondent has tried to reach out to him for comment via phone and social media but never heard back.”

Elmar Mammadyarov served at the Azerbaijani mission at the UN in New York in the early 1990s. He has been Azerbaijan’s top diplomat since 2004.