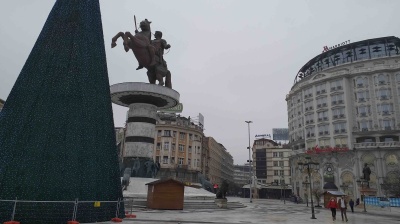 Saso Mijalkov was last seen in public at the Marriott hotel (pictured) in Skopje on February 21.
By Valentina Dimitrievska in Skopje February 22, 2021

Mijalkov disappeared a few days ahead of the final verdict in a high-profile illegal surveillance trial that is expected to see him sentenced to prison.

Mijalkov, a former member of now opposition VMRO-DPMNE, has not been seen in public since February 21 when he was spotted in a cafe bar at the Marriott hotel in Skopje with an ex-mayor of one of Skopje’s municipalities, Ivica Koneski.

"The warrant was issued on the basis of the court decision to impose a house arrest for Mijalkov, due to reasonable suspicion that he has committed the following crimes 'Abuse of official position and authority', 'Criminal association' and 'Receiving a reward for illegal influence',” the ministry said.

Mijalkov is a first cousin of former PM Nikola Gruevski, who fled the country in 2018 to avoid serving a jail term for the illicit purchase of a luxury Mercedes. Gruevski was later granted asylum in Budapest.

Mijalkov was accused in the Target-Fortress case, which concerns the illegal surveillance of communications between 2008 and 2015 and the destruction of surveillance equipment used for illicit wiretapping.

North Macedonia’s then opposition leader, now prime minister, Zoran Zaev claimed at the time that VMRO-DPMNE had ordered the illegal wiretapping of 20,000 people, including politicians, foreign diplomats and journalists. The illegal wiretaps were used by Social Democrats — which said they obtained them from a whistleblower — to overthrow the VMRO-DPMNE government led by Gruevski in 2017.

The ex-secret police chief was accused on three counts, but the last one, related to receiving a reward for illegal influence, expires at the end of February.

On January 18 during his defence statement, Mijalkov rejected all accusations of being involved in illegal surveillance, and asked for the indictment to be amended to 'unethical action' during his term as director of the secret police.

On February 16, prosecutors rejected his demand and asked judges to determine a maximum prison sentence for Mijlkov of 13 years. On February 19, Mijalkov did not use his right to make a closing statement, instead leaving his lawyers to speak for him.

The Prosecutor's Office received the first indication that an escape was being planned late on February 20 and issued an order for house arrest on February 21. The same day Mijalkov was unavailable to the authorities. The verdict was due on February 26.

It is not known whether Mijalkov has left the country, and — if he did — how this was done since his passport was seized as part of the investigation.

Mijalkov was expelled from VMRO-DPMNE in 2018 as he supported the Prespa name deal with Greece that changed the country’s name to North Macedonia.

The party is now accusing the government and Zaev of being responsible for Mijalkov’s disappearance. VMRO-DPMNE urged the prime minister to resign immediately.

Zaev said that the disappearance of Mijalkov was not political.

“As all our people, I am disappointed that he [Mijalkov] has not yet been found and arrested,” Zaev said.

“I call on institutions to act immediately and find Saso Mijalkov and implement the court verdict. I am convinced that this can be done,” Zaev added.

Mijalkov’s son and other members of his family were invited for questioning by the police.

Mijalkov is also indicted in several other cases. These include Trezor (Vault) concerning the misuse of state funds by secret police officials to buy video monitoring equipment, Tortura (Torture) for ordering political opponent Ljube Boskoski to be tortured during his arrest, and election fraud case Titanik 2 (Titanic 2).