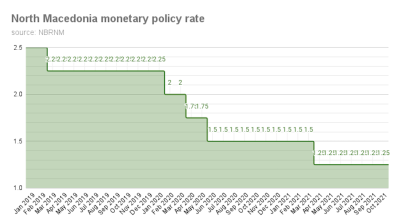 North Macedonia’s central bank has kept its key rate unchanged at 1.25%, as it assessed it appropriate for the current economic and financial conditions, it said on October 13.

The central bank said that the country’s economy expanded by 5.2% in the first half of the year, which is almost in line with the projection of 5.4%.

Available data for the third quarter of 2021 mainly point out to further annual growth of economic activity, but more moderate than in the previous quarter.

“Data for the period July-August show high annual growth rates in trade and catering activities and a minimal decline in the industrial production,” the central bank said.

Construction activity also declined in the first month of the third quarter.

Regarding inflation, the annual price growth was 2.8% in the first nine months of the year.

“It is estimated that price pressures for now mainly arise from factors on the supply side, without greater pressures from the demand,” the central bank said.

Inflation figures are slightly higher than expected, which together with the upward revisions in import prices indicate risks for moderately higher inflation than the inflation rate of 2.2% projected for this year.

"Thereby, the uncertainty and variability in the movement of world prices of primary products, and above all energy, in the next period is emphasised,” the central bank said.

The IMF projected an average inflation of 3.1% for North Macedonia in 2021.

The next auction of CB bills is due to be held on November 10.