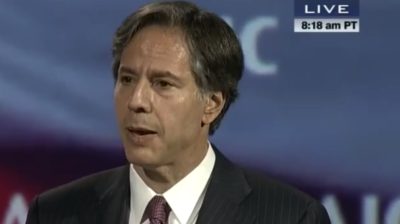 The US will not be making a move to quickly rejoin the Iran nuclear deal abandoned by Donald Trump, two of Joe Biden’s top national security nominees said on the eve of Biden on January 20 taking over from Trump as US president.

Biden has pledged to take the US back into the accord—agreed between Tehran and six major powers in late 2015 during the Obama presidency to ensure the Iranian nuclear development programme remains entirely civilian in return for a sanctions shield, but abandoned by Trump in May 2018—if Iran resumes strict compliance with it. But that stance may be problematic for the Iranians, who have pushed for the dropping of the heavy Trump sanctions applied to Iran in advance of returning to compliance.

“We are a long way from there,” Antony Blinken, Biden’s choice for secretary of state, told the US Senate Foreign Relations Committee at an appointment confirmation hearing on January 19, referring to the point when Biden will decide whether his administration can take Washington back into the nuclear deal, otherwise known as the Joint Comprehensive Plan of Action (JCPOA). saying the Democratic president-elect would need to see what Iran actually did to resume complying with the pact.

If Iran said it was returning to full JCPOA compliance, “we would then have to evaluate whether they were actually making good [on that] … and then we would take it from there,” Blinken added, also noting that ultimately Biden also wanted an agreement with Tehran that limited its missile programme and support for regional proxies.

Speaking earlier at her own confirmation hearing, Biden’s choice for director of national intelligence, Avril Haines, also suggested that a decision to return to JCPOA pact was not imminent. “[Biden] has indicated that if Iran were to come back into compliance, that he would direct that we do so as well. And I think, frankly, that we are a long ways from that,” she said.

Partly as a protest against Europe’s major powers for not implementing any meaningful action that would protect the Iranian economy from Trump’s “maximum pressure” sanctions-led campaign against Iran, Tehran has gradually breached key JCPOA limits. Its non-compliance with the deal has seen the building up of the Iranian stockpile of low enriched uranium, the enriching of uranium to higher levels of purity and the installing of centrifuges not permitted under the agreement.

Blinken said public reporting now indicated that the time it would take Iran to make enough fissile material for a single nuclear weapon had fallen to three or four months from over a year under the deal. Iran, however, has always denied ever having a programme aimed at building a nuclear bomb.

Separately, Iran appears to be trying to use the fact of Trump’s departure from the White House as a factor of persuasion in pushing the South Koreans to unfreeze around $7bn in Iranian money—largely payments from oil sales—frozen in bank accounts in South Korea by, Seoul claims, the requirements of the US sanctions regime.

The South Korean government is in negotiations with the Iranian embassy in Seoul over unlocking the mission’s bank account, DONGA reported on January 20.

The Korean Ministry of Foreign Affairs said that "the bank and the embassy are in discussions regarding the account of the Iranian embassy in Korea," and "the government is supporting smooth negotiations for opening the account".

Iran lately seized a Korean oil tanker traversing the Persian Gulf. It appears to be using the move as leverage in negotiations for the bank monies—deposited in Woori Bank and IBK Industrial Bank—although Tehran denies the seizure is linked to its demands for the unblocking of the accounts.

As a stopgap measure to ease tensions with Tehran, the Korean government has been exporting medicines and medical devices needed by Iran in a barter agreement under the auspices of the Korea-Iran Humanitarian Trade Working Group.

The departure of Trump, meanwhile, is leading to a realignment of alliances in the Gulf, with Saudi Arabia having joined fellow Arab nations in the region in ending a three and a half year-old blockade of the Arab monarchy of Qatar, perhaps seeking Arab unity in the face of an Iran that, freed of the enmity of the Trump administration, could be on the rise. While hit by the constraints of the Saudi-led embargo, Qatar has turned to Iran and Turkey for assistance such as enhanced trade and flight corridors. Its isolation over, Qatar appears to be returning to its role of “Switzerland of the Gulf” in attempting to get Tehran and Riyadh seeing eye-to-eye.

On January 19, Iranian Foreign Minister Mohammad Javad Zarif responded positively to a call from his Qatari counterpart for the commencing of a dialogue between the Gulf countries.

“Iran welcomes the call by my brother, Foreign Minister [Mohammed bin Abdel Rahman] al-Thani, for regional dialogue. As we have always emphasized, our problems will be solved by cooperation in creating a ‘strong region’: peaceful, stable, prosperous, and free from global and regional hegemony,” Zarif wrote on Twitter.The foreign minister stressed that his country is ready to Al-Thani said Doha would be prepared to mediate the proposed dialogue.

Despite close ties between Qatar and the US, Tehran retains rather warm relations with Doha. The two countries have established trade and economic cooperation, including in oil and gas development.

Navalny ends his hunger strike after three weeks
3 hours ago
Putin holds out a hand of co-operation at the online climate summit with Biden
12 hours ago
Czechs to cut number of Russian diplomats in Prague to same as they have in Moscow
12 hours ago
#BREAKING: Russia withdraws troops from Ukraine’s border
1 day ago
Navalny rally disappoints on a low turnout
1 day ago