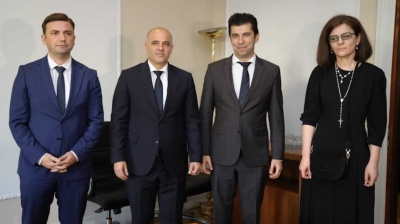 North Macedonia’s PM Dimitar Kovacevski said on May 23 that there has been no progress in talks with Bulgarian officials, in terms of achieving a joint document that will open the way for lifting the Bulgarian veto on Skopje to launch the EU accession talks, media in Skopje reported.

Kovacevski gave the statement after meeting with Bulgarian Prime Minister Kiril Petkov in Rome where a joint delegation celebrated St. Cyril and Methodius, the day of Slavic literacy.

The meeting was also attended by the foreign ministers of North Macedonia and Bulgaria, Bujar Osmani and Teodora Genchovska, respectively.

"Talks are continuing in order to reach a document that would be acceptable to both countries and will be the basis for a solution,” Kovacevski was cited by Makfax.

Kovacevski explained that the two sides did not discuss new conditions set by the Bulgarian side, but talked about previous issues, for which there is already the so-called Portuguese proposal, which is still the basis for talks between the foreign ministries.

“At this point I cannot say about progress in reaching a mutually acceptable document and until such a document is reached we cannot talk about any progress in negotiations," Kovacevski said.

However, Kovacevski's general assessment was that the meeting took place in a constructive atmosphere.

Earlier, Petkov said that North Macedonia's delegation had promised Kovacevski that the constructive dialogue would continue.

The head of the Bulgarian government stressed that the two countries have not set deadlines and called on the public not to succumb to provocations by various groups trying to escalate tensions.