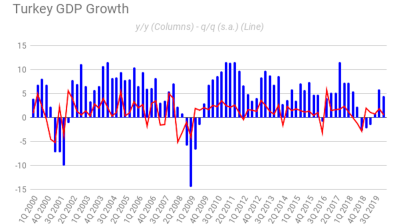 Turkey managed GDP growth of 4.5% y/y in the first quarter, but thanks to the coronavirus (COVID-19) crisis, the party is over before it’s begun—the latest activity figures are “ominous and point to a collapse in activity in Q2”, according to Capital Economics.

The GDP data for the first quarter, released on May 29 by the Turkish Statistical Institute (TUIK), showed that household consumption and investment both expanded by close to 3% q/q (household consumption was also up 5.1% y/y), driven by a surge credit growth in late 2019 and the start of this year as the Erdogan administration attempted to secure a rapid bounceback from recession-ailed 2019 with cheaper money. Government consumption leapt by 11.1% q/q, marking the fastest rise since 2008, and also 6.2% y/y. “The government has been loosening fiscal policy for some time now and the sharp increase in government consumption last quarter may also partly reflect higher healthcare spending as the coronavirus outbreak escalated,” Jason Tuvey at Capital Economics said in a note.

Net trade provided some support to growth, but the drivers of this do not provide much comfort, said Tuvey, adding: “While exports slumped by 2.3% q/q on the back of weaker external demand, this was more than offset by an 8.0% q/q plunge in imports presumably as domestic demand started to weaken towards the end of Q1.”

On an annual basis, exports dropped 1% and imports jumped 22.1%.

Turkey’s first full-year downturn in over a decade is a risk, according to most forecasts, but Treasury and Finance Minister Berat Albayrak last week reiterated the official view that positive economic growth is still expected in 2020. The International Monetary Fund (IMF) anticipates a 5% contraction in Turkish GDP this year, while Fitch Ratings expects 3%.

Turkish President Recep Erdogan opted not to bring in a full COVID-19 lockdown, referring to the need to keep Turkey’s economic “wheels” turning, but economic activity still appears to have sunk. “Indeed, the manufacturing PMI [purchasing managers’ index] is consistent, on past form, with a 40% y/y drop in industrial production and capacity utilisation has plunged. The tourism sector has, unsurprisingly, been among the hardest hit parts of the economy, with foreign tourist arrivals down by more than 99% y/y in April. And even though virus containment measures have started to be eased in recent weeks, activity remains well below normal levels. Overall, we have pencilled in a contraction in GDP of around 15% q/q in Q2,” Tuvey concluded.

Turkey’s growth rate lagged economists’ forecasts. Surveys by Bloomberg, Reuters and state-run news service Anadolu Agency predicted a GDP expansion of between 4.9% and 5.4%. The economy grew by 6% in the final quarter of 2019.

Haluk Burumcekci, founder of Istanbul-based independent research firm Burumcekci Research and Consulting, told Bloomberg: “The outlook for the rest of the year depends on how long the sudden slowdown in the economy following the COVID-19 outbreak will last. Current signs show the economy might rebound in the third quarter following a very steep contraction during the current period, should the fight against the outbreak succeed.”

Economic output over the 12 months to March totalled $758 bn, the figures showed, comparing with $754bn in 2019. Dollar-based data is impacted by the lira’s performance against the currency.