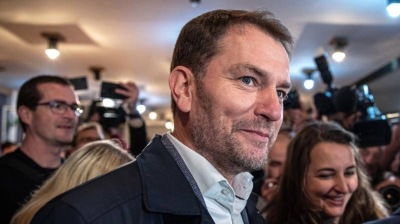 Slovak general elections winner Ordinary People and Independent Personalities (OLaNO) leader Igor Matovic confirmed his ambition is to form an anti-corruption government out of four parties in order to have a constitutional majority in Parliament.

Matovic has already discussed the idea with Freedom and Solidarity (SaS) head Richard Sulik and We Are Family leader Boris Kollar, and is set to meet For the People head and former president Andrej Kiska.

According to the Slovak President Zuzana Caputova, the country urgently needs a vigorous and motivated executive with new legitimacy so that it can deal with the serious challenges that it faces.

“A really great deal of confidence has been given to this movement and to other parties, along with an adequately great deal of responsibility,” said Caputova who will meet with leaders of We Are Family, SaS and 'For People' parties first and then ask Matovic to form a government.

“We stand ready to aid the introduction of change to Slovakia, that's what we have received the mandate from our voters for. We'll do our utmost to realise priorities that we promised to our voters,” said Kiska, the news agency quoted.

As the analyst Aneta Vilagi put it, the election results show a societal demand for change in the government and orientation of Slovaks in terms of values.

“The second aspect … confirms the long-standing trends in value orientation in Slovakia, where it was plain to see that parties that unequivocally profiled themselves as conservative or those closer to conservative values fared much better in the race than, for instance, Progressive Slovakia-Together,” she noted.

Smer-SD failed to put its traditional emphasis on social benefits, Vilagi pointed out. “The last-moment attempt in the form of the 13th pension payment or the maternal contributions hike didn't carry the same weight as social pledges, previously characteristic of Smer-SD,” she stressed.

According to Budgetary Responsibility Council (RRZ) chairman Ivan Sramko, public finances will be a challenge for the new government. “Based on preliminary data we can say that the 2019 public finance deficit significantly exceeded the level of 1% of GDP, thereby confirming risks identified by RRZ,” he commented, SNA quoted. “Similarly, a negative trend is being confirmed in 2020 as well, with risks currently reaching almost 1.9% of GDP. If the new government fails to adopt any measures, the deficit might climb to 2.4% of GDP,” Samko said, adding that given an originally planned balanced budget in 2019, this is not so favourable starting position for the new government.

“Reversing this trend is particularly important for compliance with both EU and national budgetary responsibility rules. If there is a failure to reduce the deficit significantly in the upcoming years, the government might face the relatively strict sanctions of the third debt brake zone as early as in 2022,” he concluded.