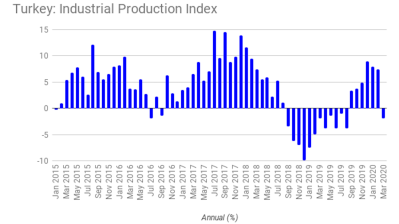 Turkey delivered a negative surprise to the market on May 14, posting an industrial production decline of 2% y/y in March. In a Reuters poll, output was forecast to rise 1.8% y/y, despite the initial impact of the coronavirus (COVID-19) outbreak that caused many factories to halt operations.

The decline recorded by the Turkish Statistical Institute (TUIK) ended a run of six consecutive rises seen since the country began its recovery from last year’s recession.

Month-on-month, industrial production was down 7.1% in March on a calendar and seasonally adjusted basis. The poll had produced growth predictions of between 0.5% and 5%.

The government’s official forecast for GDP this year is for an expansion of 5%, but that target has not been revised since the onset of the pandemic and analysts anticipate that Turkey is in fact on course for its second recession in as many years. The European Bank for Reconstruction and Development (EBRD) this week predicted a contraction of 3.5%.

TUIK said that the March data may be revised as the deadline for value-added tax declarations, used in calculating production, had been extended for certain sectors due to the coronavirus and alternative sources had been used to measure output.

All three main sub-indices—mining and quarrying, manufacturing and electricity, gas, steam and air conditioning—dropped in the March data, by 5.6%, 1.9% and 0.9%, respectively.

Muhammet Mercan, chief economist at ING Turkey, said in a note: “Among sectors, automotive, textile and apparel were significant drags on monthly manufacturing production, taking away 1.4ppt each from the total figure.

“Only four sectors, namely chemical, paper, wood and tobacco products, recorded month-on-month increases, though at relatively small rates, showing the extent of the impact from the pandemic.

“Despite the start of local lockdown measures, which happened later than in European countries, production declines in major export sectors, with the strongest negative impact on the headline rate, are indicative of evaporating demand in Turkey’s key export markets, the eurozone and Middle East.”

Mercan underlined that worse data is ahead, saying: “Overall, recent global developments have started to weigh on economic performance, given the sensitivity of the growth outlook to global activity. Recent data points to a much sharper decline in April as electric energy consumption was down by more than -15% YoY in April, after a relatively mild -0.2% drop in March. This points to much weaker industrial output, while the Turkish economy is expected to be in recession again this year.”