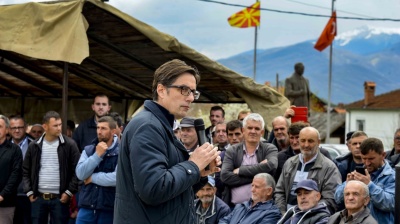 Ruling coalition candidate Stevo Pendarovski on the campaign trail. Pendarovski has a narrow lead over his main rival Gordana Siljanovska-Davkova, nominated by the opposition VMRO-DPMNE party.
By bne IntelliNews April 17, 2019

The Prespa agreement, under which the country formerly known as Macedonia was recently renamed to North Macedonia, has become the preeminent issue in the race for the country’s presidency, that has revealed still deep divisions over the so-called “name deal”.

Three candidates entered the race to replace incumbent head of the state Gjorge Ivanov, who is serving his second mandate and cannot stand for a third term.

Stevo Pendarovski was nominated by the governing coalition and is supported by 30 smaller political parties from all ethnic communities in the country. His main rival is Gordana Siljanovska-Davkova, a law professor nominated by the opposition VMRO-DPMNE party.

The third candidate Blerim Reka, who was proposed by small ethnic Albanian parties Besa and the Alliance for Albanians, would take just 12.6% of the vote.

The first round of voting will take place on April 21. If no candidate wins 50% of the votes — which seems likely — then a second round will be held on May 5 when the choice will narrow to the two candidates with the most votes. In the second round, most likely to be a face-off between Pendarovski and Siljanovska-Davkova, the turnout has to be at least 40% or around 723,000.

This will be the sixth presidential vote in the country since its independence from former Yugoslavia in 1991, and the first since the name change.

The country was renamed under the deal with Greece which solved the long-standing dispute between the two neighbours and opens the way for Nato and EU integration of the tiny Balkan country.

The election is seen as a first major test of the governing coalition of the Social Democratic Union of Macedonia (SDSM) party and ethnic Albanian Democratic Union for Integration (DUI) after the contested name deal entered into force.

It has been an intense campaign with election posters plastered everywhere in the capital Skopje, and candidates campaigning every day across the country.

Those who will vote for Pendarovski are convinced they will vote for better future by becoming part of Nato and the EU. Others still passionately believe that Siljanovska-Davkova will annul the name deal with Greece, and will restore the old name of the country.

Siljanovska-Davkova, 64, is a harsh opponent of the Prespa name deal, and argues the name change is against international laws. She has also accused the current government of corruption and nepotism.

Pendarovski, 56, was the country’s coordinator for Nato accession. He is a professor of political science and a long-term politician seen as having strong integrity. This will be his second run at the presidency. In the previous election in April 2014, Pendarovski, the SDSM candidate, was defeated by the incumbent head of the state Ivanov, who was supported by now opposition VMRO-DPMNE, which at that time was a strong ruling party.

Pendarovski is focusing his campaign on the need for reforms and the implementation of the Prespa deal with Greece as a prerequisite for launching EU accession talks. He is also pointing out that Nato and EU entry are priorities for the country that will bring also economic benefits and stability.

The two have clashed over the name deal in TV debates. While Siljanovska-Davkova argued that the Prespa deal breaks international law, Pendarovski said that the reality is that the world of politics is above the law.

Macedonia had a clear verdict from the International Court of Justice in the Hague that Greece violated the 1995 interim agreement by preventing the country’s Nato membership in 2008, but the verdict did not meant anything. Greece continued to block our Nato and EU membership, Pendarovski said during one TV debate.

Reka, 58, a law professor and former ambassador to the European Union, supports the name deal, but criticises the current government for what he calls “selective justice”. However Reka has a little chance of progressing to the second round.

1.8mn people aged 18 and over are eligible to vote in the election in the country of 2.1mn. The candidate will be elected for a five-year mandate.

The post of president is mostly ceremonial, but he/she is also commander-in-chief of the army. According to the Constitution, the presidential candidate should be over 40 years old and be a resident of the state for at least 10 of the last 15 years.

The first president after Macedonia gained its independence was Kiro Gligorov (from 1991 to 1999), supported by the Social Democrats, who survived an assassination attempt in October 1995. He was succeeded by Boris Trajkovski, proposed by VMRO-DPMNE, who was killed in a plane crash in Bosnia in 2004.

The third president was Branko Crvenkovski, from SDSM, succeeded by Gjorge Ivanov in 2009.