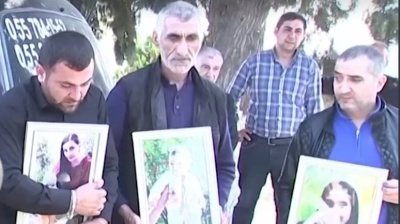 Human rights groups have documented attacks on civilians, including with the use of cluster bombs, by both sides resulting in a substantial death toll.
By bne IntelIiNews November 3, 2020

Artillery strikes on civilians in the Nagorno-Karabakh conflict could amount to war crimes, UN human rights chief Michelle Bachelet said on November 2. She also reiterated a call for Azerbaijan and Armenia to cease attacks on towns, schools and hospitals in the disputed mountain enclave.

Separately, Armenia’s Prime Minister Nikol Pashinian called for an international investigation into the presence of “foreign mercenaries” in Nagorno-Karabakh after ethnic Armenian forces said they had captured two fighters from Syria. Azerbaijan has denied the presence of foreign combatants and its close ally Turkey has denied deploying them after recruiting them in Syrian conflict zones.

Fierce battles continue along the front line of a conflict is thought to have claimed the lives of several thousand troops and those of many civilians. Nagorno-Karabakh is internationally recognised as part of Azerbaijan but it is controlled by ethnic Armenians.

UN High Commissioner for Human Rights Michelle Bachelet said indiscriminate attacks in populated areas in and around the conflict zone contravened international humanitarian law. She said in a statement cited by Reuters that repeated calls for both Armenia and Azerbaijan to avoid the loss of civilian life and damage to civilian infrastructure had gone unheeded. Three declared ceasefires, arranged by Russia, France and the US in turn, have been quickly shattered with each side blaming the other.

“Instead, homes have been destroyed, streets reduced to rubble, and people forced to flee or seek safety in basements,” Bachelet said. “Such attacks must stop and those responsible for carrying them out, or ordering them, must be held to account.”

Just hours after agreeing in Geneva on October to refrain from deliberate targeting of civilians, Azerbaijan and ethnic Armenian forces in Nagorno-Karabakh accused each other once more of shelling residential areas.

Referring to data from both sides of the conflict, Bachelet said around 40,000 Azerbaijanis had been temporarily displaced by the war while some 90,000 ethnic Armenians had fled Nagorno-Karabakh and were currently in Armenia. The self-proclaimed republic has a population of around 150,000.

The Artsakh Defence Army, as the ethnic Armenians in Nagorno-Karabakh refer to their armed forces, informed Yerevan that they captured two Syrian combatants over the weekend, one from Syria’s Idlib province, where Turkish forces are stationed, and the other from Hama.

Pashinian said the involvement of “foreign mercenaries” was “a threat not only to the security of Nagorno-Karabakh and Armenia but also to international security and this issue should become a subject of international investigation”.

Both Russia and Iran have expressed concern at reports of mercenary fighters being deployed in the conflict.

Baku has accused Yerevan of bringing in Syrian Kurdish fighters to defend Nagorno-Karabakh, which it denies.

Ahval on November 2 reported Turkish Foreign Minister Mevlut Cavusoglu as saying that Turkey was proud of Azerbaijan’s military achievements against Armenian forces in the fighting over the enclave. It cited Turkish state-run Anadolu Agency news service as relaying his comments.

“You have shown the power of Turks to the whole world,” he reportedly told Azerbaijani President Ilham Aliyev in Azerbaijan’s capital Baku. “We are very proud. Hopefully, we will return our ancient lands through these successful operations.”

Yerevan has accused Baku of allowing Ankara to steer its foreign policy as regards Nagorno-Karabakh, claiming the fighting will not end unless Turkey agrees to it.

The Associated Press on November 2 carried a report on Armenian recruits being baptised before heading to war. Reuters put out a report on Azerbaijan’s exiled soccer champions, Qarabag FC, known as “The Barcelona of the Caucasus”, dreaming of a post-war homecoming.

On November 1, thousands marched in West Los Angeles to show their support for Armenia and the ethnic Armenians in Nagorno-Karabakh. There were calls for the US get much more involved in settling the conflict and hunger strike declarations.