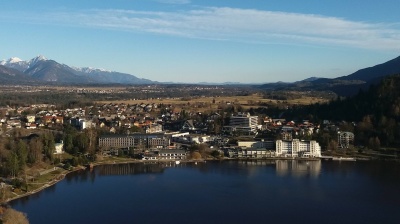 Slovenia's first zero waste hotel is located close to the lakeside resort of Bled, one of the country's top tourist destinations.
By Clare Nuttall in Bled Slovenia March 4, 2020

Countries across Central and Southeast Europe are working to improve their tourism offerings and visitor numbers are going up year by year. But with growth in tourism comes a growth in waste, including mountains of single-use packaging, a problem activists and a growing number of private sector companies in Slovenia are trying to address.

Slovenia prides itself on its beautiful, pristine countryside, and the Slovenian Tourist Board has long made sustainability and green tourism a central part of its offering.

Yet as visitor numbers grow — arrivals were up by 3.8% and 7.8% respectively in the peak summer months of July and August 2019 — so does the volume of waste they generate.

“The biggest sources of waste [in the tourism industry] are food and plastic,” Helena Nieboer of Slovenian non-profit Ecologists without Borders tells bne IntelliNews. “Plastic — mostly single-use packaging of food (eg. at breakfast), plastic bottles and single-use toiletries; food — it is estimated that up to 60% of all waste in a hotel comes from their restaurants.”

Globally, the scale of the plastic waste produced by major hotels is staggering. Calculations by sustainability and plastics consultant Marissa Jablonski for Eco-Business estimate that a 200-room four-star hotel at full capacity can use about 300,000 pieces of single-use plastic in a month, including 49,765 plastic amenities and amenity packages, 216,693 pieces of plastic for food and beverage operations and 20,000 plastic water bottles. Campaign group A Plastic Planet says that 855bn plastic sachets are used every year, enough to cover the entire surface of the planet, many of which are thrown away without being opened.

In Slovenia, Ecologists without Borders analysed waste management data from Bled, a small town of just over 8,000 people on the shore of Lake Bled, one of Slovenia’s top tourist destinations. This revealed a “steep increase in municipal waste and residual waste generation during summer months, starting at the beginning of June and lasting until the end of September, when data plummeted again. When we linked the data to tourist arrivals and overnight stays, it perfectly matched.”

An article published by the NGO points out that not only do hotels create waste in the form of single-use plastic packaging, but tourists tend to use more water and electricity and create more waste when travelling than during their everyday lives.

The NGO has been working with pizza chef and entrepreneur Antonino Esposito, who first introduced the concept of zero waste hotels and restaurants, and collaborated with Hotel Ribno, a family-run hotel and glamping site in the village of Ribno about 2km from Bled, to turn it into Slovenia’s first zero waste hotel. 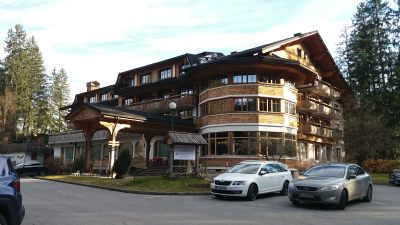 The hotel dates back to the 1980s, but the chalet-style exterior has recently been renovated, and the old exterior wood has been re-used to make furniture for the lobby and restaurant. It embarked on an intensive two-year programme to reduce waste and ensure that any waste from the hotel was separated, which ended with the hotel achieving a 92% separate collection rate. It also aims to cut back on water and energy use.

Entering the hotel, there is a set of recycling bins where you can separate your waste into organic, plastic, paper, textile and other categories before even arriving at the reception desk. There are similar sets of bins on each floor but none in the guest rooms (except for a tiny bin in the bathroom). There are no mini plastic packages either for toiletries (soap is provided in a refillable dispenser) or in the restaurant, where mostly local foods are laid out in bowls and plates. Signs on blackboards around the hotel urge guests to contribute by not taking more than they plan to eat from the buffet, sorting waste for recycling, drinking tap water instead of bottled water and using reusable bags when going shopping.

Nieboer tells bne IntelliNews that the NGO gets inquiries from hotels, restaurants and event organisers looking to emulate this on a regular basis. “Some of them are already implementing environmentally friendlier solutions without seeking recognition in the form of an eco-label,” she says.

Beyond the hotel sector, according to Ecologists without Borders, "in addition to separate waste collection, the event organisers of Jurjevanje in Bela krajina, Art kamp and (Z)mešani festival also introduced measures for their prevention. They cut the use of disposable plastics and installed drinking fountains at their venues."

Meanwhile, on the demand side, says Nieboer, “More and more tourists search for hotels with a different experience. They value the zero waste philosophy and the protection of our healthy and green environment. Therefore hotels with zero waste certificates and labels attract a different kind of guest.”

But not everyone gets it. Other hotels in the Bled area and elsewhere are seeking to reduce waste and ensure that any waste produced is recycled. Yet this has had a mixed response among tourists, with online reviews of some hotels in the resort complaining, for example, about the lack of individual toiletries in the bathrooms. “I would have expected a hotel of this calibre to have a better selection of toiletries,” complains one disgruntled traveller faced with a single refillable soap/shampoo dispenser in his bathroom.

Ecologists Without Borders points out that the steps towards zero waste tourism are being taken in a country where green tourism and sustainability have long been promoted.

“Slovenia is one of the cleanest and most environment-friendly countries in the world. It is the only country with a zero-waste capital where green tourism is also on the rise. Slovenia’s goal is to be a green country ensuring its people's health, safety and sustainability,” says the NGO’s website.

Ljubljana currently recycles 68% of its waste, up from 29.3% in 2008, putting it at the top of European cities in terms of the percentage of waste recycled. Across the country, there is a 55% recycling rate for municipal solid waste, which is as high as 80% in some communities.

This is unusual in the CEE/SEE region, where Eurostat data shows that recycling is generally behind that in western EU members, though waste generation is lower too as consumption levels and the related explosion in packaging waste still have not caught up with the western part of the bloc. In fact, Slovenia produces larger amounts of waste than its peers in Central and Southeast Europe, though still relatively small amounts in an EU-wide comparison.

The steps being taken in Slovenia come in the context of announcements made by major international hotel chains that they are cutting back on single-use plastics or eliminating them altogether, responding to the growing environmental awareness of business travellers and tourists.

They include the Marriott group that said in 2019 that it will replace most of its hotels’ single-use toiletries with larger bottles this year, which, it said, will prevent about 500mn tiny plastic bottles being sent to landfill each year. It is also eliminating plastic straws, a step already taken by the Hilton chain, which has also cut back on single-use mini toiletries.