Moscow has the second highest road rage score in the world 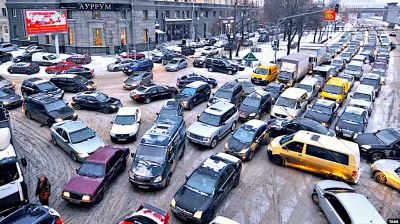 Moscow scored 98.46 for road rage on a scale of 1-100, second only to the Mongolian capital Ulaanbaatar in a survey by Mister Auto.
By Ben Aris in Berlin November 12, 2019

Mister Auto has released a survey of which cities in the world are the best and worst to drive in that found Moscow has the second highest road rage index in the world, after only Ulaanbaatar.

The survey, released on November 12, ranked 100 top international cities using 15 criteria divided by three subcategories covering infrastructure, safety and costs on a scale of 1-100. Canada’s Calgary came out as the best place in the world to drive on the composite with a score of 100 and is the benchmark for all other cities. Dubai, Ottawa, Bern in Switzerland and El Paso in the US, in that order, take up the rest of the top five.

The survey included four Eastern European cities, Prague, Warsaw, Moscow and St Petersburg, that in a surprise to no one all ranked near the bottom of the list. Prague did by far the best and the driving experience is already on a par with its western European peers, ranking 58 over all out of 100 cities. But Warsaw, Moscow and St Petersburg are all near the bottom of the list ranked at 80, 89 and 91 respectively.

Drilling into the details, there is much that fits the stereotype of driving in Eastern Europe, with a few surprises.

Anyone who has driven in Moscow knows how simultaneously terrifying and boring it can be as you deal either with being overtaken on the inside by a car travelling at over 150km/h on one of the so-called eight-lane spoke roads that feed the centre of the city, or get immobilised in a traffic jam for hours on end.

The biggest danger is the reckless driving by some better-off Russians in fast cars, who can afford pay off traffic cops if they are stopped. That is set against the tendency for Moscow’s drivers to drive into a junction when the traffic is heavy, ignoring the red lights, and getting stuck, causing gridlocks at crossings that bring traffic to a standstill.

Moscow mayor Sergey Sobyanin has recently introduced yellow hatched boxes in some junctions policed by a camera where it is illegal to come to a standstill, that Muscovites take seriously, but these are still a rarity and are mostly found around the Russian Duma building in the capital.

Moscow scored 98.46 for road rage on a scale of 1-100, second only to the Mongolian capital Ulaanbaatar, which got a score of 99.12, from the entire 100 cities surveyed. That result will surprise anyone that has driven in the Mongolian capital where the traffic is not very heavy, as the city is located in a grassy valley, not large at all, and simply peters out into fields after a few kilometres. But driving is made chaotic by the venal traffic cops, the terrible state of the roads, and the number of horses on the road, as most of the bucolic population get around on horseback as the country has so few cities. The country with the least road rage in the world is Osaka, Japan’s second largest city, where public transport predominates as the preferred form of getting around.

With Russian’s proclivity for fast driving perhaps it is not surprising that both Moscow and St Petersburg are in the top 10 for traffic related fatalities with both cities recording 18 deaths per 100,000 inhabitants.

But the survey results belie the changes in the traffic in recent years, which has improved enormously since Sobyanin cracked down on illegal parking and introduced state-of-the-art parking meters with heavy fines for abuses that are actually enforced. The rapid rise of inexpensive and highly efficient online taxi services, led by Yandex.Taxi, has also greatly reduced the traffic on the road, which is expected to fall further now that car sharing apps are making inroads. But driving in Moscow remains an unpredictable experience.

Unsurprisingly even though Moscow has introduced paid parking in the whole centre and plans to extend it into the suburbs, the cost of parking for two hours in the centre is still under $5, making the Russian capital one of the cheapest places to park in Europe and ranked 71st in the survey. Prague is even cheaper at $3.61 for two hours and St Petersburg at $2.01 is 95th cheapest out of 100.

As a major oil producer, it is no surprise that the cost of petrol in Russia is also ranked amongst cheapest in the world at $0.71 per litre ranking Moscow and St Petersburg at 93 and 94 from 100. The Russian road tax is likely very low at only $45.9 per year. Lagos may be the most deadly place from the 100 to drive but at least it has by far the cheapest fuel at $0.40 per litre.

Public transport is an important alternative to driving and New York, Singapore, Tokyo and London top the ranking for mass transport services, all with close to perfect scores. Moscow’s legendary metro system also scores the best from the Eastern European cities with a 90.65 ranking it 27th out of 100 and beating out many of its western peers, as it is just ahead of Manchester, Stuttgart and Rotterdam to name a few.

Prague has the oldest cars from the Eastern European sample with an average age of 14.5 years, putting it fourth overall out of the 100 cities sampled. But all the eastern countries have very old cars by international standards and are in the top 10 cities for oldest cars: Warsaw (13.6 years), St Petersburg (13), and Moscow (13).