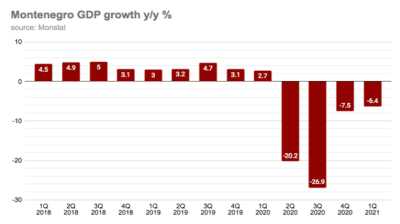 Montenegro’s GDP contracted by a real 6.4% y/y in the first quarter of 2021, after decreasing by 7.5% y/y in the previous three months, the statistics office reported on June 16.

This was the worst performance in Europe according to Eurostat figures comparing EU and selected other European economies, shared by Montenegro’s Monstat.

In 2020, Montenegro’s economy was the worst affected in Southeast Europe by the coronavirus (COVID-19) pandemic due to the collapse of its tourism sector, which typically contributes 25% of GDP. The economy contracted by 15.2% in 2020, and the contraction continued into early 2021, when new restrictions were in force to contain the latest wave of the pandemic. 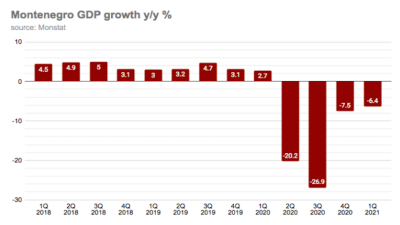 The nominal GDP contraction was 5.7% y/y in Q1, versus the 7.4% y/y fall in Q4. Measured at current prices, Montenegro's total economic output stood at €865mn, lower than the €1.16bn reading in Q4. The statistics office did not provide a sector breakdown.

However, there are hopes of a rebound later this year. The World Bank projected in its latest Global Economic Prospects released on June 8 that Montenegro’s economy will expand by 7.1% in 2021, though this means an only partial recovery from the deep recession in 2020.

The recovery is also hampered by the government’s failure so far to approve the budget for 2021, amid infighting between members of the ruling coalition. 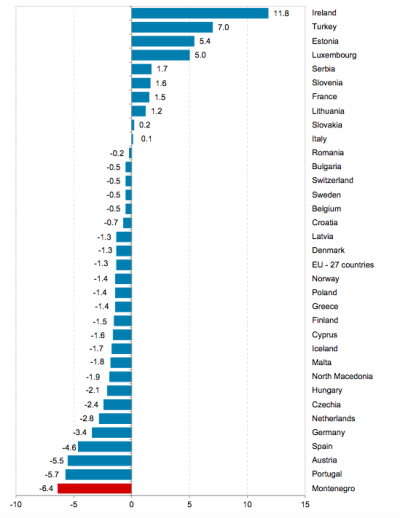 Turkey’s manufacturing PMI hits six month high in July as virus brake removed
7 hours ago
Russia's GDP catches up with pre-COVID level
3 days ago
Heatwave pushes up spot electricity prices in Southeast Europe
3 days ago
Annual growth of Slovenia’s retail sales slowed to 12.8% y/y in June
5 days ago
73.8% of Montenegrins want their country to join the EU
5 days ago