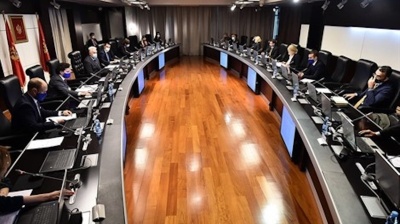 The new Montenegrin government's second session on December 10, the day the Eurobond was issued.
By Denitsa Koseva in Sofia January 25, 2021

Montenegro’s special prosecution has launched a probe into Finance Minister Milojko Spajic’s role in the issuance of a €750mn Eurobond in December 2020, a few days after the government was elected.

The bond was placed on December 10, just three days after the government took office, and was not announced in advance. However, the actions of Spajic and of Prime Minister Zdravko Krivokapic related to the bond have raised numerous questions in the country regarding the way they took the decision and whether the bond was actually necessary.

At the time, Spajic announced the successful placement of the Eurobond on Twitter and said that he country has been “saved from bankruptcy” by the Eurobond issue after the coronavirus (COVID-19) pandemic hammered the local economy.

The special prosecution decided to launch the probe after being contacted by local NGO Montenegro International, which claimed that the prosecution should establish based on which law Spajic organised the bond issue and via which banks and brokers, public broadcaster RTCG reported on January 25. The NGO claimed that Spajic had a personal interest in the bond placement.

Moreover, the NGO suggested the bond placement might be related to an alleged attempt to bribe Montenegro’s Deputy Prime Minister Dritan Abazovic. Abazovic has reported being offered a bribe shortly after becoming a minister but gave no further details.

Meanwhile, the finance ministry released details on the bond issue, revealing that the UK-based law company Linklaters was hired as a legal consultant for the procedure.

The Eurobond carries a 2.875% coupon. The demand was almost €3bn, Spajic said at the time.

The country was badly hit by the coronavirus pandemic, reporting one of Europe’s highest infection rates in the early autumn. Over 39,000 cases have been confirmed since the start of the pandemic among a population of just 628,000.

The large tourism sector contributing around 20% of GDP, suffered from the spring lockdown and international travel restrictions, contributing to one of the deepest economic contractions across the emerging Europe region.

Even ahead of the crisis, Montenegro had a high level of debt, having borrowed heavily from China’s Eximbank to finance construction of the Bar-Boljare highway. In the third quarter of 2020, the public debt-to-GDP ratio stood at 78.1%, and it was pushed up further by the Eurobond in December.

Montenegro to protect wines with smart tags in pilot study