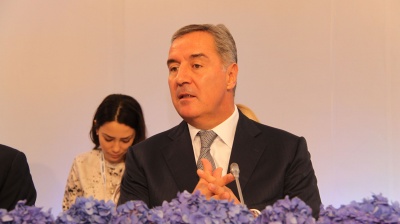 Earlier in November, BIRN published wiretapped conversations of Taci, who is accused in Albania of involvement in an international money laundering scheme, in which the Albanian businessman said he had involved Djukanovic in money transfers to Montenegro’s Prva Banka – the bank in which Milo Djukanovic’s brother Aco has a stake.

Meanwhile, Djukanovic said, as quoted by RTCG, that he will gladly answer all questions from the specialised prosecution.

“I will gladly respond to an invitation to any state authority because I want to give an example how one should act if we want to establish efficient rule of law,” Djukanovic said.

However, he also said that he had no contact with the Albanian businessman or any other person involved, and claimed this was a false accusation aimed at diverting attention from important issues in political and public life.

“It is a completely fabricated affair. I do not know who the people are, nor have I had contact with them in any way,” Djukanovic told a press conference in Cetinje on November 17.

“[T]his is a complete forgery, but these forgeries have become a kind of practice in political life in Montenegro,” he added.

Djukanovic is also being probed over revelations in the Pandora Papers that he and his son Blazo have been funnelling money to offshore accounts via a complicated network of companies in the UK, Switzerland, the British Virgin Islands, Panama and Gibraltar.

According to anti-corruption NGO MANS, in 2012 Milo and Blazo Djukanovic signed secret contracts on the management of their assets, hiding behind the network of companies in five countries. It added that Blazo has used that network to hide two more companies.

MANS, which has contributed to the Pandora Papers, said it had found papers from legal company ALCOGAL showing that Djukanovic and his son set up two trusts in the British Virgin Islands back in June 2012. One, called Victoria Trust, named Djukanovic as the beneficiary, while the other, Capecastel Trust, named his son Blazo.

The trusts have been set up for a period of 80 years and the company managing them had the right to buy and sell property, open new companies and bank accounts on behalf of Djukanovic. MANS published photos of documents proving the trusts belong to Milo and Blazo Djukanovic.

Taci was accused by Albania’s Special Prosecution against Corruption, SPAK, along with four Italian citizens and two accomplices, of money laundering and of running a structured criminal group. SPAK claims that the group laundered profits from Italian oil businesses through Albania in return for part of the cash. A court in Palermo is also investigating whether Taci and several Italian citizens laundered €22mn.

Prva Banka has been at the centre of controversy in the past, when anti-corruption NGOs dubbed the bank the “personal ATM” of Djukanovic’s family and close allies.

In 2016, MEPs called for pressure to be put on the Montenegrin authorities to start an investigation into Prva Banka over allegations the bank had been involved in money laundering.

The call followed a 2012 report from the Organised Crime and Corruption Reporting Project (OCCRP) on the bank, which showed the concerns raised by the Montenegrin central bank about Prva Banka’s lending practices ahead of the global financial crisis and its bailout by the government and a €100mn deposit from Italian company A2A after its investment into Montenegrin power company EPCG.