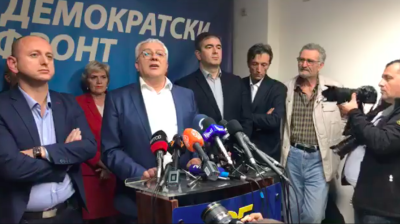 Democratic Front leaders address a press conference after the sentences are announced.
By Denitsa Koseva in Sofia May 9, 2019

The higher court of Montenegro found two opposition leaders, two Russians and several Serbs and Montenegrins guilty of plotting a coup in the “Trial of the century”, and sentenced them to jail in the first instance, provoking anger among the opposition.

Prosecutors said the plot was intended to help the pro-Russian opposition Democratic Front (DF) to seize power in Montenegro on the night of the October 2016 general election and either imprison or assassinate the country’s then prime minister (now president) Milo Djukanovic, with the help of Russian security services members and Serbian paramilitaries.

All those indicted were found guilty of plotting to commit terrorist acts and undermine the constitutional order of Montenegro during the general election in October 2016.

Two Russians who were accused of organising the plot, Eduard Shishmakov and Vladimir Popov, who are believed to be members of the Russian security services, GRU, were given the heaviest sentences of 15 and 12 years in prison in absentia.

Two of the leaders of the DF, Andrija Mandic and Milan Knezevic, got five years in prison each.

Six other defendants received shorter jail term terms. The 14th indictee, Ananije Nikic who received asylum in Russia in 2018, will be tried in absentia in a separate case.

As expected, the jail sentences for the DF leaders angered the party. Mandic and Knezevic claimed that Djukanovic and his brother Aco had ordered the court to find them guilty and faked the coup plot.

Mandic urged Serbia’s President Aleksandar Vucic and the Serbian government to end communication with Podgorica and asked for solidarity from Bosnia & Herzegovina’s Serb-dominated entity, Republika Srpska, and the Serbian member of Bosnia’s tripartite presidency, Milorad Dodik, claiming the verdicts were discrimination against Serbs in Montenegro.

The case was built on statements by the key witness for the prosecution, Sasa Sindjelic. When the trial opened in September 2016, Sindjelic said he had been hired by Sirokov to organise a coup in Montenegro in order to prevent the country from joining Nato. Sindjelic also said that the DF participated in plotting the coup and was supposed to provoke clashes on election night in order to forcefully take over power.

Sindjelic also said in his initial testimony that the DF was aware of the plan and was actively participating in it. He claimed that people he hired provided Kalashnikov machine guns for the plotters. Sindjelic said that the coup plot could have only been organised by members of the DF as they were the only ones aware of the whole plan aside from himself and Sirokov.

However, in March 2019, he backed off from his statements, saying that the suspects behind the alleged attempt to overthrow the government did not plan a coup and only wanted to rally in support of the opposition.

Although the DF was expected to provoke unrest in Montenegro after the verdicts were announced, so far party members have only spoken against the verdicts and have taken no further actions.

LONG READ: The Growers - a handful of countries in New Europe are coping with the coronacrisis and are still expanding
New coronavirus cases decline across emerging Europe but the epidemic’s not over yet
Tensions between Bosnia, Montenegro and Serbia rise over closed borders