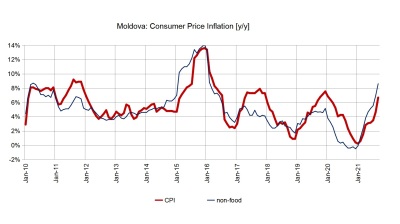 Consumer prices in Moldova increased by 1.7% in September and the annual inflation rate surged from 4.6% y/y in August to 6.7% y/y as food and fuels prices accelerated.

Furthermore, energy prices (electricity, natural gas) were not yet revised upward and they are expected to be the main inflationary drivers in the last quarter of the year.

The headline inflation may move into double digits in the coming months.

The National Bank of Moldova (BNM) increased the refinancing rate by 1pp to 4.65% at its September 3 monetary board meeting, to fight the demand-side inflationary pressures and the second-round effects of the supply shock amid higher international prices and imported inflation. It was the second 1pp rate hike at a one-month distance from the first one on August 2, and further actions may be taken given the demand-driven component of the inflation and other factors.

The sharp increase in prices seen during the summer has totally invalidated the projections of the BNM, which expected 3.3% annual inflation.

The updated forecast published by BNM in August indicated the risk of inflation exceeding the upper limit of the target range (5% +/-1.5pp) amid the pro-inflationary context of the external environment.

The context is marked by the faster-than-expected recovery of the world economy and Moldova’s main foreign trade partners, as well as by high global prices of oil, raw materials and food, the central bank’s head commented.

Headline inflation hits 13.9% y/y and is still far from peak in Moldova