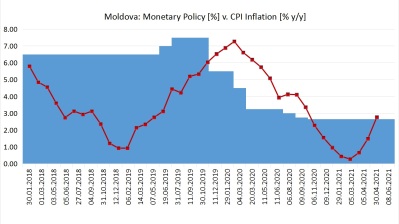 The executive board of the National Bank of Moldova (BNM) decided unanimously at its latest meeting on June 8 to maintain the refinancing rate at 2.65% and interest rates on overnight loans and deposits remain at the levels of 5.15% and 0.15%, respectively.

The move comes despite inflationary pressures generated by the weakening local currency, nevertheless in the context of low inflation in the country compared to the BNM’s 5% target. The decision reveals the BNM’s concern with economic growth rather than inflation.

The headline inflation in Moldova picked up to 2.8% y/y in April from 1.5% in March y/y, after it remained under 1% during November-January.

This decision “keeps in place the incentive stimulus monetary conditions previously adopted,” which are favourable for the development of domestic demand, the lending process and economic activity as a whole, the central bank explained.

At the same time, the economic recovery is still fragile against the background of uncertainties associated with the subsequent evolution of the pandemic and supply shocks dictated by the external environment, BNM argued. These are partially offset by modest domestic demand in the context of the weak fiscal impulse for the next period.

The next meeting on monetary policy will take place on July 30.