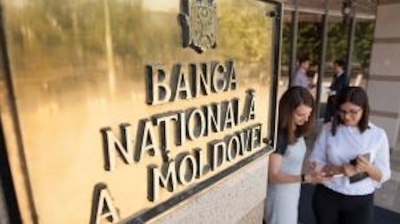 The National Bank of Moldova (BNM) cut the monetary policy rate by 2 percentage points (pp) to 5.5% in an unexpected move on December 11, despite consumer price inflation having accelerated to 7.1% in November. Furthermore, the BNM cut the required reserve ratio for local currency liabilities by 1.5pp (to 41%) gradually over a three-month period, while raising by 3pp the required reserve ratio for foreign currency liabilities to 20%.

Under the current political circumstances, the BNM’s updated monetary policy rhetoric seems to be aimed at helping the government finance next year’s budget deficit from the local market even in a situation of discontinued foreign financing. Demand-driven growth would only ease public finances at a time when they apparently need help.

The central bank explained the moves are aimed at “keeping the inflation close to the 5% y/y target,” which is seen as “optimal for the country’s economic development.” The BNM’s release invokes past calls for looser monetary policy generated by expected disinflation in 2020. But Moldova’s central bank does not hide its intention to stimulate growth by the monetary transmission mechanism. The volume of loans extended in Q3 has soared by 26% already, the BNM stated in the previous monetary policy decision at the end of October.

The latest Inflation Report on November 4 envisages headline inflation spiking to 8% toward the end of the year, to ease to 4.5% at the end of 2020, where it is seen as remaining for the first three quarters of 2021.

“Under the disinflationary conditions of 2020, the BNM decision will support the competitiveness of the economy and stimulate lending activity,” the statement reads.

The BNM promised to further pursue stimulating policies if necessary.

Moldova’s new government has approved the draft law on the budget for 2020, including a deficit of 3.3% of GDP — one-third more than in 2019. Moldova could “take a break” in its collaboration with the International Monetary Fund (IMF), said Prime Minister Ion Chicu in late November. According to Chicu, this could happen if the IMF “does not show flexibility.” Chicu and his political sponsor, President Igor Dodon, instead expressed hopes for financing of $500mn from Russia, mainly for infrastructure works.

The deep monetary policy cut on December 11 was the BNM’s first decision after Dodon and his Socialist Party replaced the government of pro-EU prime minister Maia Sandu with a cabinet formed mostly by Dodon’s advisers and headed by Chicu. The country’s central bank is headed by Octavian Armasu, minister of finance in the previous Democratic Party (PDM) government headed by former prime minister Pavel Filip, who is now president of the PDM. The PDM backed Dodon in replacing Sandu with his protege Chicu and is informally supporting the minority cabinet.