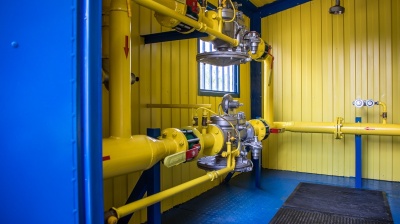 Gas infrastructure in the municipality of Ungheni.
By Iulian Ernst in Bucharest October 14, 2021

As scarce gas supplies from Russia depressed the electricity output of the power plant in Transnistria, Moldova had to “borrow” electricity from Ukraine during the day on October 13, under an existing arrangement made possible by the interconnection of the power grids of the two countries.

Moldova has been paying high spot prices to Gazprom since October 1, when Gazprom also cut the gas supplies by one third as the Russian company is apparently seeking a new long-term contract with Moldova — at the same time using the opportunity to leverage its gas supplies to alter the pro-EU orientation of the new administration in Chisinau.

"Tomorrow, the CSE decision will be published in full, and we'll see what each institution has to do. The households will not be affected by this state of alert. There are several working groups and an action plan, which will be implemented," said Spinu.

At least for the coming days, Moldova does not have to worry about electricity supplies, Spinu stated, stressing at the same time that borrowing electricity from Ukraine is only a short-term fix and that the situation on the gas market is much more critical. With no own primary energy resources (oil, gas, coal, hydro or nuclear), Moldova fully depends on imports.

Spinu admitted that Moldova has no clarity as regards under what terms the natural gas deliveries from Russia will continue after November 1.

He implied that the talks with Gazprom are not going well, since the Russians are insisting on the (high) spot prices and using the negotiations to interfere with the energy market liberalisation in Moldova agreed by the country with the Energy Community as part of its European integration process. Moldovagaz, controlled by Gazprom, should unbundle its operations under the liberalisation strategy. Gazprom has also used the argument of the $450mn overdue debt owed by Moldova proper (apart from the $7bn owed by separatist Transnistria) to Gazprom, Spinu implied.

But Moldova also lacks clarity as regards its own negotiation strategy with Gazprom.

"There is a historical relationship between Moldovagaz and Gazprom, based on some formulas and we believe that we can rely on them, maybe with some interventions [corrections]," Spinu said, updating the journalists on the ongoing negotiations.

As for Russian gas, "the price proposed by the Russian side, we consider that the market price is not acceptable for the Republic of Moldova," he added.

Russian Foreign Minister Sergei Lavrov said on Wednesday that the US and the European Union “are exercising unprecedented interference in the internal affairs of the Republic of Moldova”, claiming they are “directly banning” President Maia Sandu, from talking about the desire to have normal relations with Russia.

"We support the sovereignty of the state and the territorial integrity of the Republic of Moldova, a country close to us historically,” Lavrov said.

He stressed that Russia “respects the results” of the July parliamentary elections.

“But they [the US and the EU] forbid [Sandu] talking about the desire to have normal relations with the Russian Federation. We hope that the Chisinau authorities will be able to act independently without external pressure,” Lavrov said at the opening of the 17th meeting of the heads of security agencies and intelligence services in the CIS states on intelligence activities.