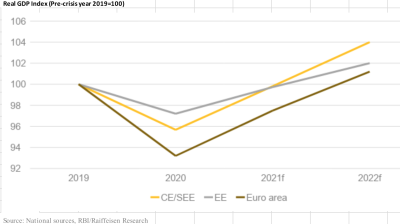 Central and Southeastern Europe are on the 'V' side of recovery, the 'U' tends to haunt Western Europe, while the 'L' sword of Damocles hangs over Russia and Belarus.
By Gunter Deuber and Nicolae Covrig of Raiffeisen Research in Vienna and Bucharest March 19, 2021

Exactly one year ago, the 'L-U-V question' was on everyone's lips and we quickly realised then that the short-term economic downside risks in 2020 were massive. In the end, this assessment  (unfortunately) came true. This time, no economy in Central and Eastern Europe came through the crisis without a noticeable GDP slump in 2020. This is bad news on the surface; however, the Eastern European region fared better than expected in the 2020 crisis. The GDP slumps were moderate compared with many Western European countries or the Eurozone (a global underperformer) or also in comparison with emerging markets – China excepted. Russia, Ukraine and Belarus also performed surprisingly well in the short term in 2020.

CEE: a crisis outperformer in the European and emerging markets context

We attribute this pleasing performance in difficult circumstances to several factors. On the one hand, the CEE economies have benefited from the fact that, with the exception of the very exposed tourism destinations Croatia and Bulgaria, the share of services, and especially services affected by restrictions in value added, is lower than in developed countries and the Western EU countries. Moreover, non-essential shares take a smaller share of private consumption than in Western Europe. In this respect, the slumps in macroeconomically important private consumption were moderate here compared to developed economies.

In addition, the rapid catch-up of the global economy – especially outside Europe – has supported global trade and commodity prices. Here we have seen clear 'V-shaped' recovery patterns. Russia and Ukraine have benefited from this (on the commodity side), but also the trade-open countries in Central and Southeast Europe.

But there are two sides to every coin. For on the other hand, the moderate GDP setbacks in 2020 imply that in some CEE countries there will not be such drastic recovery and rebound effects in 2021 as in hard-hit countries in Western Europe, and this also applies to private consumption. Also, the catch-up effects will provide less growth impetus in the short term due to the lower share of services in GDP currently affected by restrictions. This may not be such good news for the "statistically" expected economic growth rates in the short term. Therefore, GDP growth in some countries in Central and Southeastern Europe in 2021 might even be slightly lower than in Western Europe.

However, this should not distract from the big picture. After all, the moderate GDP declines in 2020 also have important forward-looking and positive implications. In many CEE countries, the pre-crisis GDP level could be reached partly already this year in 2021 or early in 2022. This is a substantial difference to the outlook for many Western European countries. Therefore, the CEE economic outlook can confidently be described as a 'V' in terms of the GDP level, in some cases even as a square root sign, i.e. here we will already be significantly higher than the pre-crisis level in 2022.

In Western Europe, the economic outlook literally looks more like a mixture of a 'V' and 'U', characterised by a 'V- shaped' slump in 2020, and a very hesitant development in 2021. The faster recovery of economic strength to pre-crisis levels also explains why we currently already have to worry more in the region about a sustained rise in inflation in the starting business cycle – especially in Western Europe, the massive slump of 2020 should prevent inflationary pressure from building up too quickly.

However, we do not see an 'L-shaped' economic outlook for the coming years – as many pessimistic prognosticators predicted at the height of the global COVID-19 crisis – even for Western Europe. This is because all the lessons learned from the current crisis point to a powerful economic recovery.

On the one hand, we see elements of an emerging markets crisis at work. And every emerging market economist knows from experience how strong a rebound can be here after drastic short-term crises. There have often been significant rebounds once the specific causes of the severe slump and/or the previously prevailing lack of confidence are quickly overcome (be it after an oil price collapse, after a currency crisis, after a debt restructuring, after a banking crisis, after a political crisis) and if there are no massive country-specific economic imbalances and the global environment is favourable as it is at present.

Moreover, there is no austerity policy in Europe this time. In the short term, the US will certainly attract attention with its substantial, but also consumption-oriented, fiscal package. The EU fiscal package is more oriented towards the medium and long term and focuses on the investment side.

It should also be emphasised here that we do not see any exaggerated austerity or savings policies in Eastern Europe. In fact, public investment in 2020 in Central and Southeastern Europe has increased much more than in the EU as a whole or is 1.5 to 2 percentage points above the EU average of about 3% of GDP. Even in a country like the Czech Republic, where growth was partly stifled in 2012/2013, we do not see any austerity at the moment if we look at the budget deficits and direct and indirect support measures. Even in Russia, there was a clear fiscal impulse in 2020, which certainly also has to do with the election calendar in 2021.

But other countries in the region are not forced into pro-cyclical austerity this time either. The countries in Central and Southeastern Europe fared somewhat less well in the EU comparison in terms of new lending in the COVID-19 crisis year 2020. Here, for example, much more impulsive lending was observed in Spain, France or Italy. However, this indicator also tends to reflect the impact of the crisis – and there was certainly not such a negative credit impulse in Central and Southeastern Europe in 2020 as there was during the global financial crisis.

It's not the economy stupid

Also due to lower rebound effects, we are not quite as exuberant as the general consensus of analysts' forecasts. Overall, we remain positive on the 2021 economic outlook for Central and Eastern Europe. We see a clear 'V-shaped' recovery pattern in many countries, while Western Europe remains caught between 'V' and 'U' for us. Only in Russia and Belarus do we see more of an 'L-shaped' development after the short-term recovery in 2021. Structural factors limit the growth outlook here. Both countries are in - albeit different – phases of political reconfiguration. There is the threat of new Western sanctions, possibly a phase of increasing political repression, and comprehensive economic and political modernisation is a long way off.

So far so good, but an important factor must also be stressed: Politics, in sum, has hardly played a very decisive factor in the fight against the pandemic. In many countries – not only in CEE – the acceptance of the current government or political system has declined, from Hungary to Ukraine. In this respect, investors should prepare themselves for several changes of government or power in the coming 12-24 months.

IFPR BMB Russia: Russia’s inflation caused by greed
7 hours ago
MACRO ADVISORY: The five Stans back in the Game
2 days ago
ING: Hungary's inflation is back to 2012 levels and above 5%
2 days ago
AFC CAPITAL: Uzbekistan’s Capital Markets Development Agency restructured as privatisation looms
2 days ago
10 megatrends shaping emerging Europe in the post-pandemic 2020s
5 days ago