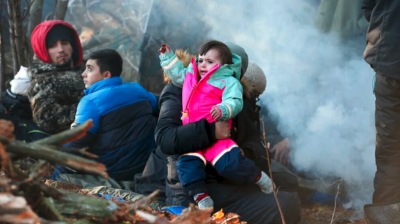 There are still clashes on the Belarusian-Polish border between border guards and migrants trying to enter the EU, but tensions have de-escalated and the woodland camp is gone as the first snows fall. / wiki
By Ben Aris in Berlin November 25, 2021

Middle Eastern migrants continue to try to storm the Polish border from Belarus, but security forces say the woodland camp is largely gone, according to reports on November 24.

"A group of over 100 aggressive foreign nationals stormed the Polish-Belarusian border at about 07:00 pm yesterday, November 23. They were throwing stones at Polish officers. Belarusian agencies were monitoring the attack," a statement by the Polish security forces said as cited by TASS.

"Groups of aggressive foreigners tried to storm the border along the sector of the border protected by the Dubicze Cerkiewne and Mielnik units," the statement said.

Separately, Russian newswires reported that the Polish border guards once again fired tear gas and stun grenades into the migrants on the border in an effort to deter them from attempting to breach the barriers, citing the State Border Committee of the Republic of Belarus.

The statement by the Belarusian State Border Committee went on to also claim that the Polish border guards also fired machine guns in an effort to stop a group of migrants from crossing.

"This time Polish forces welcomed refugees with automatic weapon fire. The area was secured by Belarusian service members to prevent any possible provocations," says the statement posted on the Border Committee’s website.

The Belarusian State Border Committee said that the situation at the Belarusian-Polish border "remains tense. The Polish forces continue gassing the refugees."

The Belarusian Investigative Committee has initiated a criminal case under the charges of “crimes against humanity,” following the clashes between migrants and Polish forces at the Bruzgi border crossing point on November 16, which were widely broadcast at the time. That occasion represented the peak of the crisis as hundreds of mostly young men tried to force their way across the divide only to be met with stun grenades and pepper spray and water cannons.

Despite the reports of ongoing clashes, the tensions are clearly de-escalating. Another two planes left Minsk on November 24 taking the would-be migrants home to Iraq and the woodland camp is gone, according to reports, as the first snows of the winter fall in the area. Most of the migrants have been moved to a nearby logistics centre and given bedding and hot food as the temperatures plunge.

EU countries have accused Minsk of intentionally escalating the crisis and have called for sanctions. Belarusian President Alexander Lukashenko counterclaimed that Western countries themselves were to blame for this quagmire, since these people were fleeing war in their homelands due to the West’s belligerent policies that have wreaked havoc in that part of the world.

Lukashenko continues to try to milk the situation to bolster his own propaganda and justify his position in office following the disputed presidential elections last August 9.

In an interview with the BBC’s Steve Rosenberg, he said that the opposition and Belarusian NGOs opposing the government were all “paid agents” of the West, who were fermenting revolt.

Separately, two days ago Lukashenko claimed that Polish authorities had used the migrant crisis to distract the population from internal problems and a clash with the EU over the authority of EU in Poland. He advised the leadership of Poland not to meddle in the affairs of Belarus.

"[Poland] attempted to resolve their domestic and external problems at the expense of pressuring Belarus and show who is to blame for Poland’s problems," he said on November 22 during a government meeting.

Russia has also thrown its weight behind the Belarusian strongman and capitalised on Poland’s strong reaction to the appearance of the migrants for its own propaganda ends.

Regardless of the motives that forced these people to flee their homeland, "they have become hostage to the situation created by Western countries", Secretary of Russia’s Security Council Nikolai Patrushev said in an interview with the Argumenty i Fakty weekly on November 23.

"The European Union that has pledged to build camps for migrants has snubbed its own initiative. Brussels keeps telling the world about European values, human rights, multi-culturalism and its open-door policy. Meanwhile, dogs are unleashed on migrants at the Polish border and they are inhumanly doused with water from water cannons and fenced off by barbed wire, with gunshots fired over their heads and helicopters scrambled to scatter away their tents with gusts of wind," the security chief said as cited by TASS.

Hungarian government declares another state of emergency
19 hours ago
Russian bond defaults could soar after US lets payment exemption expire
19 hours ago
Lira drags Turkey further down road to hell
1 day ago
No progress in talks between Bulgaria, North Macedonia on lifting veto on EU accession talks
1 day ago
Former Moldovan president Dodon detained in treason and corruption case
1 day ago