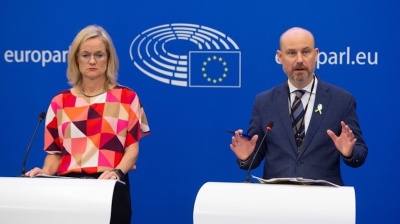 MEPs called on both Serbia and Bosnia & Herzegovina to come into line with EU sanctions on Russia, in assessments of the situations in three Western Balkan countries issued by the European Parliament on July 6.

While officially condemning Russia’s invasion of Ukraine, Serbia has so far refused to join international sanctions. Plans to introduce sanctions in Bosnia have been thwarted by Milorad Dodik, the pro-Russian Bosnian Serb member of the country’s tripartite presidency.

The report on Serbia “strongly regrets that Serbia has not aligned with EU sanctions following Russia’s invasion of Ukraine and calls on the newly elected authorities to urgently align with the EU’s decisions against Russia”.

MEPs also expressed concern about the spread of disinformation and urged both the Serbian authorities and the European Commission to fight disinformation, Russian propaganda and other hybrid threats in the Western Balkans.

“After the April 2022 elections and Russia’s war of aggression, there is a real sense that our partners in Serbia must move forward decisively on their European path,” commented the European Parliament’s rapporteur for Serbia Vladimír Bilčík.

At the same time, Bilčík said the European Parliament "encourages all pro-European forces in the country to focus fully on progress in rule of law reforms, the Belgrade-Pristina Dialogue and alignment with EU international positions. We note that much more can be done in order for Serbia to move towards the EU.”

Another controversial issue raised was the normalisation of relations between Serbia and Kosovo, which is required for either country to process towards EU accession.

The report notes the need to "achieve a comprehensive, legally binding normalisation agreement based on mutual recognition, which is crucial for both countries to advance on their respective European paths and will contribute to regional stability and prosperity”.

Serbian President Aleksandar Vucic rejected this request on July 6. As reported by Tanjug, he said Serbia will respond "nicely, decently and politely" that it will not recognise Kosovo.

According to Tanjug, this is the first time Serbia has been asked to recognise Kosovo in an official EU document.

In the report on Kosovo, MEPs stressed that the independence of Kosovo is irreversible and call on the EU countries that have not yet recognised the country to do so immediately.

“Today’s vote shows parliament’s strong commitment towards Kosovo’s EU integration and provides guidance as to how EU standards can be implemented,” MEPs said.

Also regarding Kosovo, MEPs called for urgent adoption of an EU visa-free regime, a process stalled for years. Kosovo is the sole country in the Western Balkan whose citizens cannot travel in the EU members without visas.

"Any further delays would undermine the EU’s credibility and reputation as a reliable partner," MEPs said.

The report on Kosovo was adopted by 469 votes in favour, 96 against and 72 abstentions.

MEPs commended Kosovo's increased political stability and strong commitment to its European path and support for the EU-facilitated Belgrade-Pristina dialogue, reiterating the importance of achieving a comprehensive, legally binding normalisation agreement, which is crucial for Serbia and Kosovo to advance on their respective European paths.

They also welcomed Kosovo’s alignment with the EU on sanctions against Russia and its strong solidarity with Ukraine.

MEPs urged Bosnia & Herzegovina’s politicians to return to state-level institutions and stop their obstruction, focusing particularly on the actions by the Serb-dominated Republika Srpska to follow its secessionist aspirations.

Bosnia consists of two autonomous entities, Republika Srpska and the Muslim-Croat Federation. In mid-December, Republika Srpska adopted a non-binding decision to withdraw from the armed forces, the judiciary and the state's tax system. The plan was supposed to be put into force in mid-June. However, in June, the pro-Russian secessionist leader Milorad Dodik, who is the Serb member of Bosnia’s tripartite presidency, asked the entity’s parliament, which is under his full control, to put on hold the secession plans for six months due to the war in Ukraine.

Although there were calls on MEPs to follow the example of the US and UK and also sanction Dodik, no such decision was taken. However, MEPs called on all political leaders in the country to abide by and implement the commitments in the political agreement reached in Brussels on 12 June 2022.

“After a year of political deadlock and escalatory secessionist movements, the political agreement reached in Brussels on 12 June 2022 and the most recent Council conclusions declaring readiness to grant candidate country status to BiH are strong signs of the EU’s commitment to the European and Euro-Atlantic future of the country,” rapporteur Paulo Rangel was quoted as saying in the statement.

“Our report further reaffirms parliament’s support for the European aspiration of the citizens of Bosnia and Herzegovina, while addressing the main challenges the country still faces. These are namely the destabilising activities and the blocking of state institutions by the leadership of Republika Srpska, which must be sanctioned, and the impasse in electoral and constitutional reforms,” he added.

Bosnia is also urged to overcome the impasse in the negotiations on constitutional and electoral reforms, as well as to join the EU’s sanctions on Russia.