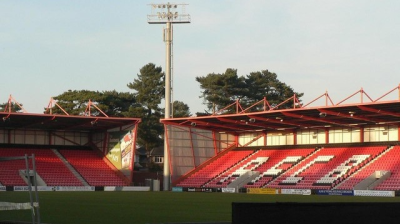 The Cherries were promoted to the top flight this season after finishing second in the Championship. The promotion is likely to see increased scrutiny of owner Maxim Demin, a wealthy Russian petrochemicals trader. / Image: Wikimedia Commons.
By bne IntelIiNews May 25, 2022

AFC Bournemouth has come a long way since Russian multi-millionaire Maxim Demin bought into the club in 2011. In the four years after Demin purchased his 50% stake in the team, it has shot up the ranks, transformed from a lowly League One side to a familiar name in the Premier League.

Along the way, another investment from Demin’s AFCB Enterprises Ltd made him the full owner of the club in 2013.

Demin’s arrival marked the start of a period of prosperity for the club. Bournemouth’s transfer record was exceeded in the first January 2011 transfer window with the club forking out GBP800,000 ($1mn) on striker Matt Tubs. Up until then, the club had never paid more than GBP210,000 ($263,000) for a transfer, a record which was set in 1989.

The club shattered its transfer spending record again in 2013, when it paid an estimated GBP2.5mn ($3.13mn) for Tokelo Rantie, and in 2014 it bagged Callum Wilson for around GBP3mn ($3.76mn). Most recently, Bournemouth paid a rumoured GBP4mn ($5.01mn) for Scottish winger Siriki Dembélé in January 2022.

It’s not just in squad selections that the presence of a big backer has made itself felt. The team has re-developed a stand at its stadium, broken ground on a new training facility at Canford Magna (estimated to cost around GBP35mn ($43.9mn)) and renovated the club shop. There are even rumours of a new stadium (suitable for a top-flight club) in the pipeline.

After two years in the Championship, the Cherries will return to the Premier League this year. They secured an automatic promotion when they beat Nottingham Forrest 1-0 at home on May 3, placing them second in the Championship overall.

Now that Bournemouth has been promoted, the club will see broadcasting, advertising and ticket revenue increase further.

But with the stadium question unresolved and more expensive transfers needed for the club to maintain its hard-won place in the Premier League, Bournemouth will continue to rely on funding from Maxim Demin.

It will therefore come as a relief to the club that Demin is not among the 76 oligarchs to have been sanctioned by the UK government since Russia invaded Ukraine on 24 February, 2022.

Demin appears to be a secretive character, and is not known to have given any interviews with the British media in his time as owner of Bournemouth. The origins of his wealth are unclear, although he is described as a petrochemicals trader.

Demin’s company, Wintel Petrochemicals, is owned by a trust registered in Guernsey. He has a house in Weybridge, Surrey, and another on Sandbanks, the premium peninsula overlooking Poole Harbour, where former football manager Harry Redknapp lived until recently.

However, Demin lives in Switzerland most of the time. Switzerland’s low taxes have made it a favoured haunt of many of the Russians who got rich in the privatisation of state assets after the collapse of the USSR.

Demin’s company, Wintel Petrochemicals Ltd. is worth around GBP100mn ($125mn). It has no website, but company intelligence platform DueDil says that it is “involved in the sale of fuels, ores, metals and industrial chemicals”.

Prominent Russian oligarch Roman Abramovich has announced that he will sell Chelsea Football Club after being sanctioned by the UK and the EU. In light of this, Maxim Demin has reaffirmed his commitment to AFC Bournemouth.

With the Cherries heading back into the top flight for the 2022/3 season and no sign that Russia plans to withdraw from its positions in the Donbas and southern Ukraine, the media-shy Demin is likely to face greater scrutiny than ever before. AFC Bournemouth will be bracing itself for some difficult questions.

Putin appeals to BRICS leaders for support
Ukraine has been clear that it needs more weapons from the West. So, what’s the holdup?
White House doubles number of long-range rocket launchers sent to Ukraine in fresh aid package