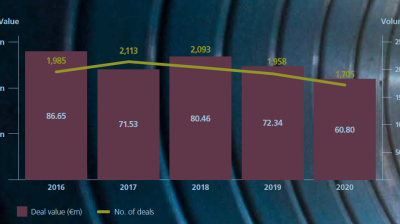 Mergers and acquisitions activity shrank in 2020 as a whole, but a strong Q4 heralds better times in 2021
By bne IntelliNews January 21, 2021

Mergers and acquisitions in Central and Eastern Europe fell sharply in 2020, a year blighted by the coronavirus (COVID-19) pandemic, but there are already signs that deal-making will rebound sharply this year, according to the Emerging Europe M&A Report 2020/21, prepared by law firm CMS and information platform EMIS and published on January 21.

In 2020 there were 1,705 deals in the region covered by the report (which includes Central and Southeastern Europe plus Russia, Ukraine and Turkey) with a total value of €60.80bn, year-on-year declines of 12.9% and 16% respectively. It was the third annual decline in deal value and the lowest number of deals in the 10 years CMS has been publishing the report.

However, the region’s performance was quite good compared to other emerging markets, according to CMS, and deal values surged in the fourth quarter, with €24.3bn of transactions, as investors regained confidence, valuations stabilised, and there was a rush to spend the accumulated store of dry powder.

“Overall, the region responded quickly and firmly, and the economic effects were not as severe as they might have been previously. Many deals did not happen, but since the autumn we have seen a pipeline of activity that is a good sign for 2021,” said Horea Popescu, corporate partner in CEE at CMS. “Towards the end of 2020 we saw people rushing to sign deals that they had been unable to complete earlier in the year.”

“As things started to clarify, investors realised that their original valuations were not too far off,” he told bne IntelliNews.

In 2020, a total of 26 companies from the region listed, nearly double that of 2019 (14) and the highest number since 2015. The value of IPOs reached €4.79bn, the second highest annual figure in the 10 years since CMS has done the survey, with the €2.3bn flotation of e-commerce giant Allegro in Warsaw the standout deal, not just of the year but of the decade.

“The fact that capital markets across the globe were quite buoyant made the IPO route a bit more tempting,” Popescu told bne IntelliNews. “It allowed better multiples than a trade sale.”

In terms of sectors, telecoms and IT if anything benefited from the pandemic as companies accelerated digitalisation. The sector had the highest number of deals at 333, up from 300 in the previous year, and was second by value at €12.97bn. Mining (including oil & gas), was the top sector by value at €14.1bn (up 21.4%), despite falling 13.3% in deal volume.

Real estate was pushed into second place in terms of the number of deals (310 deals, worth €9.46bn), but CMS said it was a making a record start in 2021, with great interest in logistics and warehouses because of the shift to e-shopping. CMS tipped renewable energy as another likely hot area for deals in 2021.

In terms of investors, there was a shift to domestic and regional-based investors, who remained confident despite the pandemic, at the expense of international investors. While cross-border deals  decreased by 34.3% by number (and 31.5% by value), domestic deal activity picked up by 18.4% (and 21.2% by value). Russia, Poland, Turkey and the Czech Republic were the busiest dealmakers from within the region.

US was the most active international investor, with 94 deals (down 23%) worth €4.03bn (down 31%), followed by Western European investors (UK, Germany, France, Netherlands, Austria), with the three last increasing deal value significantly. Investors from China and Japan fell out of the top 10 source countries by value.

“I’m not sure the long-awaited Asian wave ever came to fruition,” said Popescu. “I think it’s still relatively low tide.”

Private equity’s share of transactions continued to increase to 18.7%, with funds keeping deal flow steady at 319 and deal value down just 11.1% at €20.14bn.

Broken down by countries, the best performing country was Poland, which was the only one to see increases in both deal numbers and value. Deal volumes climbed by 9.3% to 282, and values rose by 6.6% to €11.65bn, the highest deal value since 2011. As well as the Allegro IPO, the other mega deal was Iliad of France’s €3.69bn acquisition of Play Communications.

“Poland, as in the previous recession, bucked the trend and continued to grow,” Popescu told bne IntelliNews, adding that further large private equity deals are expected in the country. “They reinforced themselves as the leading M&A country in the region.”

Elsewhere in Central Europe, Popescu said the Czech Republic was probably the hardest hit, with a 24.7% fall in transactions and a 51.7% drop in value.

In Turkey, despite a decrease to 184 transactions, deal value surged by 80.4% to €7.86bn, lifted by the €1.6bn acquisition of Istanbul-based Peak Games by Zynga of the US. CMS said Southeastern Europe was quite stable overall, with markets such as Romania, Bulgaria and Croatia all seeing only modest drops in deal volumes. It said interest in Romania remained robust, with transaction numbers down less than 5% and values just 6.9% lower, supported by the €1.2bn purchase of the local assets of Czechia’s CEZ by Australia’s Macquarie Infrastructure and Real Assets.

“Romania and Bulgaria had a relatively better trend,” said Popescu. “This will continue into the new year as well.”