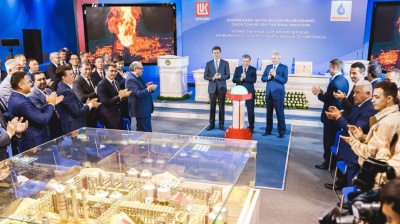 Guests including Uzbek President Shavkat Mirziyoyev at the podium applaud at the opening ceremony for the Kandym Gas Processing Plant of Lukoil Uzbekistan Operating Company.
By Alisher Kalandarov in Tashkent February 23, 2021

Russia’s Lukoil, the sixth largest taxpayer in Uzbekistan with deductions at around $1bn per annum, is said to be suffering shrinking profitability as the Central Asian country is currently developing hard-to-recover gas reserves.

Independent analyst Igor Tsoy told bne IntelliNews that the Russian giant was presently addressing several tough technological issues, but that the very fact that it was demonstrated its longer term value to Uzbekistan as it can showcase its wealth of experience and innovative technologies.

Said Tsoy: “On March 5, 2020, at a meeting between the Uzbek President Shavkat Mirziyoyev and Lukoil CEO Vagit Alekperov, the parties expressed the desire to further deepen cooperation in the field of geological exploration and development of new hydrocarbon deposits. In June 2020 Lukoil and Uzbekneftegaz inked a memorandum on joint exploration and production of oil and gas in the territory of the country.

“Lukoil has innovative technologies for exploration drilling. In the long term, cooperation with Lukoil will be of strategic importance for the development of the country's oil and gas industry”.

Last year marked 15 years since Lukoil began operations on the Uzbek market. Its total investment across all projects in the country today stands at around $8bn. The company produced its first gas at the Hauzak-Shady section of the Dengizkul field in 2007.

Deputy Energy Minister Behzot Normatov in November last year said that Uzbekistan was now working with Lukoil on the basis of a public-private partnership (PPP) under a production sharing agreement (PSA).

"Eighty percent to eighty five percent of the money received by the enterprise remains with the state. To date, the state's revenue from Lukoil projects has exceeded $4bn, and Lukoil has earned a little more than $1bn in the country by selling gas to Uzbekistan. At the same time, the company invested $7bn… becoming one of the largest investors in the country," he said.

The PSA with Lukoil on the Kandym-Khauzak-Shady project is in effect until 2046, with the term on the Gissar project ending in 2043.

Other Lukoil milestones in Uzbekistan include:

• In 2011, Lukoil Uzbekistan Operating Company produced its 10-billionth cubic metre of gas in the country. Five years later, in 2015, it announced the 30-billionth.

• In September 2017, Lukoil successfully launched the main production and technological facilities of the South-West Gissar project. Among the commissioned facilities were a complex gas treatment plant with a nominal capacity of 4.4bn cubic metres per year, a gas pretreatment plant and four gas collection points.

• In November 2017, Lukoil commissioned the first line of the Kandym Gas Processing Plant (GPP) five months ahead of schedule. It has a processing capacity of 4.05bn cubic metres of gas per year. The company also completed work on the construction of a pre-factory zone, a road system, external power and water supply facilities, a collection system and an export gas pipeline.

• In March 2018, Lukoil commissioned its first petrol station in Uzbekistan; in 2020 the petrol station won an award recognising it as the best in Tashkent.

Uztransgas said the extraction, purification and processing of natural gas is a complex, expensive and high-tech process.

“The final product processed by Lukoil meets the highest standards and is in demand on international markets. In addition, Lukoil is one of the largest taxpayers in the country. It pays taxes on its profits, taxes for the use of mineral resources and other mandatory payments to the state treasury”, Uztransgas said.

Lukoil’s website states that it employs more than 2,700 people in Uzbekistan, of whom more than 92% are Uzbek citizens.

Lukoil Uzbekistan Operating Company can also boast that it has several times received "The Best Employer in Uzbekistan" and "Most Desirable Employer in the country" awards.