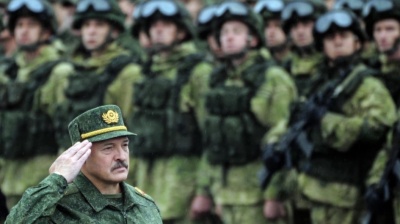 Lukashenko with his troops. / https://foreignpolicy.com/
By bne IntelliNews July 5, 2022

If there’s been any previous doubts of Lukashenko’s true allegiance, his speeches and actions of the last two weeks have demonstrated his “unwavering” support for Russia’s invasion of Ukraine. While Ukrainian officials don’t see any immediate invasion threat from Belarus right now, Ukrainian intelligence and border patrols are watching the Belarusian army’s moves closely.

Since their meeting, Lukashenko has considerably ramped up his war rhetoric, which has stoked Western and Ukrainian fears that Belarus might invade western Ukraine to put an end to the influx of Western military hardware.

In his speech during Belarus Independence Day on July 3, Lukashenko said that he had decided that Belarus’ should participate in Russia’s invasion of Ukraine “some time ago,” and announced that he had ordered the military to “aim at” decision-making centres in the capital cities of Minsk’s opponents.

Furthermore, in a run-up meeting to the Independence Day celebrations on July 2, Lukashenko made some worrying statements on how Belarus’ could possibly join Russia’s war on Ukraine.

According to Lukashenko, Belarus would only fight in Ukraine “if you cross that last metre of our land and invade our land.” At the same time, Lukashenko claimed that Belarus’ air defence systems had intercepted Ukrainian missiles headed for Belarus; however, he provided no further evidence for his claims.

These comments further increased the fears of a possible Belarusian invasion of Western Ukraine, as Ukrainian intelligence officials have previously warned that Russia might stage a false flag operation in Belarus to give Lukashenko an official reason to invade.

These fears were what prompted the Mayor of the Ukrainian city of Lviv to begin preparing the city for a possible military attack last week. However, the mayor’s fears were downplayed by Ukraine’s First Deputy Minister of Internal affairs, Yevhen Yenin.

According to Yenin, there was a lot of disinformation out on the internet aiming to scare Ukrainians of a possible Belarusian invasion. To this he added: “Unfortunately, some representatives of local authorities pick up on this disinformation, spreading panic among the population.”

The head of Ukraine’s Defence Ministry’s Chief Intelligence Directorate, Kyrylo Budanov, has said that the actual number of Russian troops in Belarus is “insignificant, absolutely tiny,” and according to him there are no signs indicating that Russia will increase its troop presence in Belarus.

According to Budanov, there is also no threat from the Belarusian troops’ current exercises near the border with Ukraine, as they are conducting scheduled exercises which Ukrainian Intelligence knew about two and a half months before they began.

Nevertheless, Belarus is mobilising at a worrying pace. On June 30, independent Belarusian Media reported that Belarusians had begun receiving conscription notices en masse. Apparently, even people who had previously been deemed unfit for service had received notices.

Ukraine’s Armed Forces’ General Staff reported the same day that the military departments of Belarus’ southern regions were considering how to conduct covert mobilisation of the population.

Belarusian enlistment officers have claimed that the conscription notices were not related to the war in Ukraine, but the move is still giving reason to worry that Lukashenko is planning something more than he’s admitting to.

On June 24, Ukrainian intelligence stated that Russia was planning to blow up civilian infrastructure in the Belarusian city of Mozyr to give Lukashenko an official reason to go to war. On Saturday, Yenin reiterated that the Ukrainian border patrol is on high alert due to the threat of infiltration by sabotage and reconnaissance groups from Belarus.

Lukashenko replied to this by saying: “remember this: Not a single move in Belarus, especially these days, is made without an approval and orders by President Lukashenko.”

This statement does not make anything the least bit better for Lukashenko, as his last ounce of innocence in this war lay in the fact that he is being controlled by Putin. Instead, this statement makes it clearer than ever that Lukashenko has approved of and personally stands with all Russian aggression against Ukraine emanating from Belarusian territory.