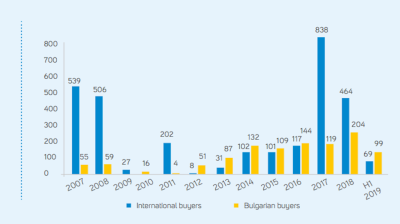 Local investors were responsible for more than half (59%) of the real estate investments in Bulgaria in the first half of 2019, reversing the trend seen in the last two years as the volume of foreign investment tumbled, a new report from Colliers showed.

The total value of investment transaction in the first half of the year was just over €167mn, putting Bulgaria on track for a considerably quieter year compared to the last two years.

A transaction volume of €957mn was recorded in 2017 and €668mn in 2017. In both years, foreign investors made the largest share of transactions.

“By the end of 2019 investment volumes are likely to stand lower compared to the last two years, but still exceed the annual levels in the period 2009-2016,” said the report.

In terms of the type of deals, development land transactions made up about 42% of the total volume, followed by offices (32%), hotels (19%) and other types of properties (8%).  Office and retail properties show the greatest potential, Colliers said.

Transactions with income- generating properties accounted 53% of all transactions, while the remaining 47% were speculative investments.

“Increased demand and actual purchase of development land will continue. This signals that the market is in a phase, stimulating the construction of new projects that may subsequently turn into investment product,” said the report.