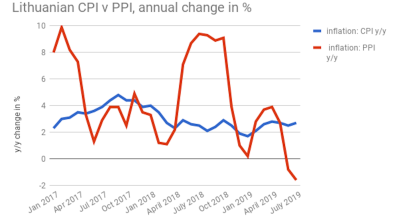 The indicator thus doubled its fall rate after going into negative territory for the first time since 2016 in June, ending the PPI inflation run of 31 months. Still, headline inflation picked up its growth rate to 2.7% y/y in July, adding 0.2pp to the annual reading from the previous month.

The utility segment saw factory gate prices drop 2.9% y/y in July, versus a reduction of 1.8% y/y the preceding month.

Prices in the mining and quarrying sector grew 1.1% y/y in July, after a growth of 1% y/y recorded in the sixth month.

In the water supply segment, prices increased the fall rate to 7% y/y in July, after declining 6.1% in annual terms in May.

In monthly terms, PPI inched up 0.3% in July after falling 2.8% month on month the preceding month.