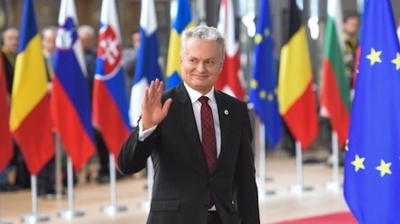 The Lithuanian president wants to prevent countries with “unsafe nuclear power plants” from exporting electricity to Lithuania, according to a number of legislative amendments sent to the parliament last week.

The move is clearly aimed at Belarus, which is moving towards launching its nuclear power plant in Astravets, 50 kilometres east of the Lithuanian capital Vilnius. Lithuania has long complained about the Astravets plant being developed with little transparency and in breach of the Espoo Convention that regulates the transboundary impact of major projects.

“The import of electricity produced in a manner dangerous to Lithuania's environment and public health poses a threat to our national security. It is necessary to take additional measures already now, which would limit the possibilities of [importing] such electricity,” said Lithuanian President Gitanas Nauseda in a statement.

On top of the claims of the opacity of the project, Vilnius also claims that the construction is taking place in a seismic zone. According to the World Health Organization, Astravets is indeed in a zone of heightened seismic risk although that is still classified as “low”.

The Lithuanian parliament, the Seimas, declared the Astravets project a threat to national security, the environment, and public health two years ago. Poland has also criticised the project.

Neighbouring Latvia and Estonia appear to not share Lithuania’s concerns about Astravets and have not passed any similar measures restricting future electricity flows from Belarus.

The Russia-designed Astravets plant will feature two VVER-1200 reactors with a total capacity of 2,400 MW. The first Astravets reactor is expected to go online by the end of 2019 and the second one in 2020. The plant is expected to cover around a third of Belarus’ electricity demand, mostly met by gas-fired power plants today.