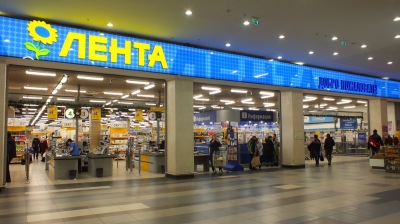 Russian supermarket chain Lenta has just bought its smaller rival Billa to strengthen its position in the Moscow and St PEtersburg markets, and would be happy to buy more regional supermarkets as a consolidation of the sector gets going.
By Ben Aris in Berlin May 23, 2021

Top five Russian retailer Lenta bought smaller rival Billa on May 19 in a bid to strengthen its position in the two leading markets of Moscow and St Petersburg as Russia’s organised retail sector starts to rapidly consolidate.

“We acquired Billa as part of our strategy to double sales in the next five years,” Lenta CFO Rud Pedersen told bne IntelliNews in an interview.

Lenta is a second tier player behind the two market leaders Magnit and X5 Retail Group that have nationwide networks and are battling it out for the top slot. Only a day earlier Magnit announced it had taken over Dixy, the third-largest supermarket chain, also to strengthen its position in the Moscow and St Petersburg markets, as well as in Russia's third-largest city of Novosibirsk. Upon completion of the deal, which is subject to approval by Russia’s competition regulator, Magnit will own more than 24,000 retail outlets across Russia, and sales could be just 6% behind the combined revenue of X5’s Pyaterochka and Perekrostok brands, VTB Capital (VTBC) estimates.

In an investor presentation earlier this year, X5 said it believes the Russian food market will consolidate to a point where the top firm controls at least 20% of the market, with a second dominant chain holding a 15% market share, the Moscow Times reported. Both X5 and Magnit have said they want to reach that 15% threshold within the next two years.

The retail markets in Russia’s twin capitals are key to any retail outlet, as with a combined population of 17mn the two cities have around twice the customers of many countries in Central Europe: Czechia (10.6mn), Hungary (9.7mn), Austria (8.9mn) and all three Baltic states (6.2mn). And rather than spread out over a whole country, their populations are densely packed into giant apartment blocks, which means each store can serve tens of thousands of shoppers who live only a few minutes' walk away.

The acquisition of Billa will improve the mix of stores that Lenta has to offer, which has traditionally focused on the larger formats, while Billa runs smaller shops that are much closer to its customers’ homes.

“We are not focused on being number one and we are happy to be the second largest,” says Pedersen. “The strategy is to grow in Moscow and St Petersburg. Billa fit in with this strategy very well.”

Pedersen says that the footprint of the two kinds of store overlap in the two big cities and complement each other very well.

“There is a crossover of customers so Lenta can move closer to its customers, as it was not close enough before,” says Pedersen.

The supermarket business has been maturing, and now the whole country is well served with stores a process of consolidation has clearly started, catalysed by the economic slowdown caused by the pandemic. It's a process that has a long way still to run, despite this week’s mega-mergers.

“The Russian market is still very fragmented – much more than the western markets,” says Pedersen. In Russia the top five players hold about 30% of the market, whereas in the west it is more like 75%. The consolidation in Russia is relatively insignificant. With the Billa acquisition we want to take part in that consolidation process.”

The general rule is the bigger the supermarket business the better. Large stores that sell large volumes of staples command more leverage thanks to their economies of scale and are in a stronger negotiating position with suppliers.

“Being a large player gives you an advantage and the pandemic has benefited the federal level retailers. Sales have gone up [at the big stores], while they have fallen at the smaller chains,” says Pedersen.

Lenta, like the other big players, is continuing to grow its business organically, but is happy to buy up the smaller players in the regions if it can.

“If the opportunity presents itself; if we can become number one or two in other cities via M&A we will do it,” says Pedersen.

Apart from the large federation-wide players, smaller retailers have grown up in most regions where they have been left unmolested to develop. However, as they continue to expand and due to the added pressure of the pandemic these smaller chains are coming under increasing pressure and they are more willing to sell.

Lenta paid for Billa out of retained earnings and Pedersen says the company may tap some of its credit lines modestly, but is not planning to greatly increase its debt to finance a wave of acquisitions. The company’s debt to EBITDA ratio is currently a comfortable 1.7x, but Pedersen says it wants to return the ratio to 1.5 by the end of the year.

In the 90s supermarkets sprang up like the mushrooms they sold and in a two-decade-long race began to capture as much market share as possible. But now the bricks and mortar business is maturing the number of players is dwindling and only a few big companies are likely to be left at the end of the process.

Russia’s e-commerce is booming and in the new e-grocery business, the fastest growing segment of Russia’s new economy, it's like the early days of traditional retail: new companies are springing up every few months to try to capture specific niches and the race to capture market share is in full swing. The market leaders have all launched an online offering and it is central to their growth plans, but entire new players are entering the business that have never sold food and drink before.

“Lots of new e-grocers are entering the market and if anything, the online business has become even more fragmented,” says Pedersen. “Many are trying to get into the business but eventually there will be few, as that business consolidates as well. You have to have the fragmentation before you can get to the consolidation.”